Top 14 Things to Do in Moc Chau 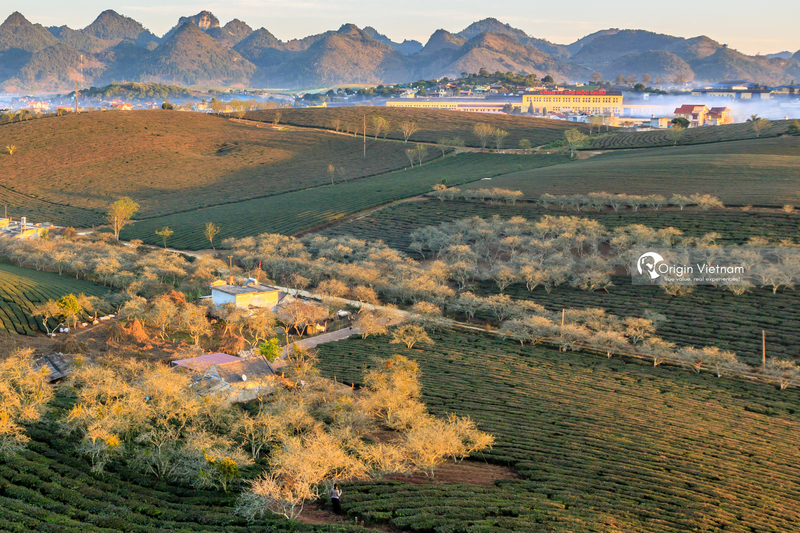 Thong Cuong village is a Hmong village located between two communes of Dong Sang of Moc Chau and Xuan Nha of Van Ho district. The pathway to Thong Cuong with white flower reform valleys. This is also one of the favorite photography spots for young people. 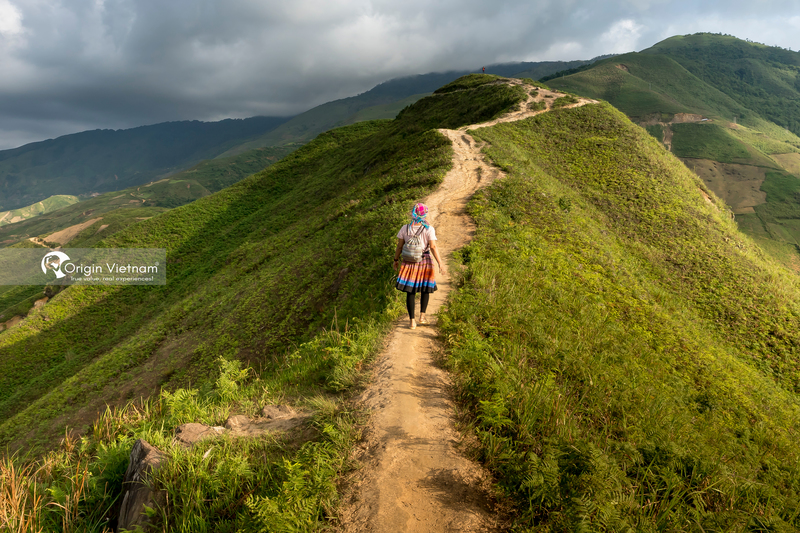 The road to Pa Phach is quite dangerous, passing through consecutive sloping up sweat. When up to the top looked down to see a valley of blue sky plum, peach … a few Hmong’s houses hidden in the forest. Looking to this side of the plateau Moc Chau extends well head full of green grass, young corn, some dairy cattle grazing grass …

Due to the terrain located between the two mountains. Pa Phach is gradually increased to create three copies of the Green of the Mongolian. The climate is generally cool, with many surrounding forests and especially when the afternoon is foggy. Dense sealed like in the fog. 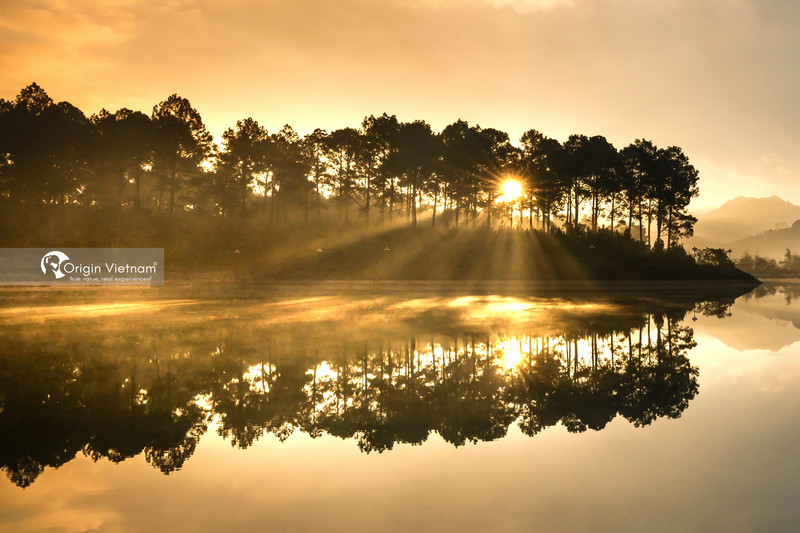 Located on Moc Chau Plateau (Moc Chau District, Son La Province). This area is not only a fresh and cool climate. The scenery is romantic, but also preserving the cultural treasures of the Thai people.

From Moc Chau Farm Town, you follow Highway 43 about 2km to the south to Ang village. From above, Anh is beautiful as a water painting with traditional stilts on the floor, hidden under the canvas of green leaves. Near by the village is a natural lake with an area of ​​5 hectares surrounded by green pine forests planted on reddish brown fertile hills. In the distance, the scenery of Moc Chau plateau, especially in the spring, with the tea hills, green pasture, flowers, banana flowers, plum blossom white forest seemed to adorn the beauty of Angle. spiritual, romantic. 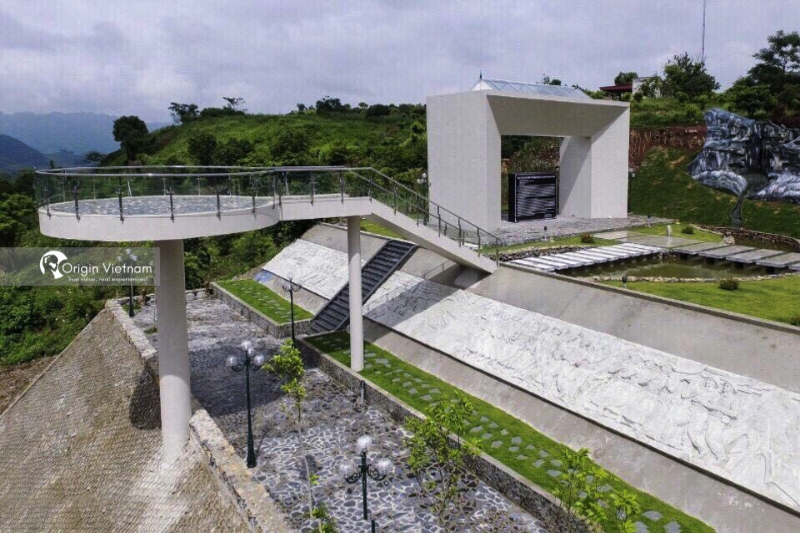 Tay Tien Park or full name is a historical memorial. The 52nd Regiment of Tay Tien was built at Moc Bo Hill in Moc Chau. The design of the memorial from Tay Tien was inspired by the poem “Tay Tien” by poet Quang Dung – a soldier of the Tay Tien Regiment. To visit, experience the restoration and embellishment of the historic memorial to the 52nd Regiment of Tay Tien. Where we will be honestly felt about the soldiers together the ideal of living. But also full of charm and romance. They have united, united, overcome difficulties, hardships, determined to fight sacrifice for the independence and freedom of the motherland. 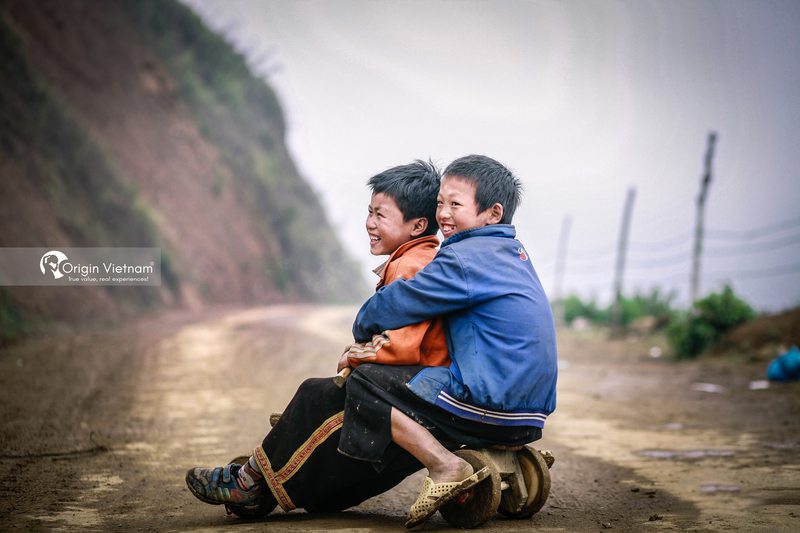 This is a large resort located in Lung village, Muong Sang commune. It is built on a wide space with many small scenes. Such as the heart, windmill… along with that here grow a lot of flowers create a beautiful scene and majestic for you to spoil the photo. 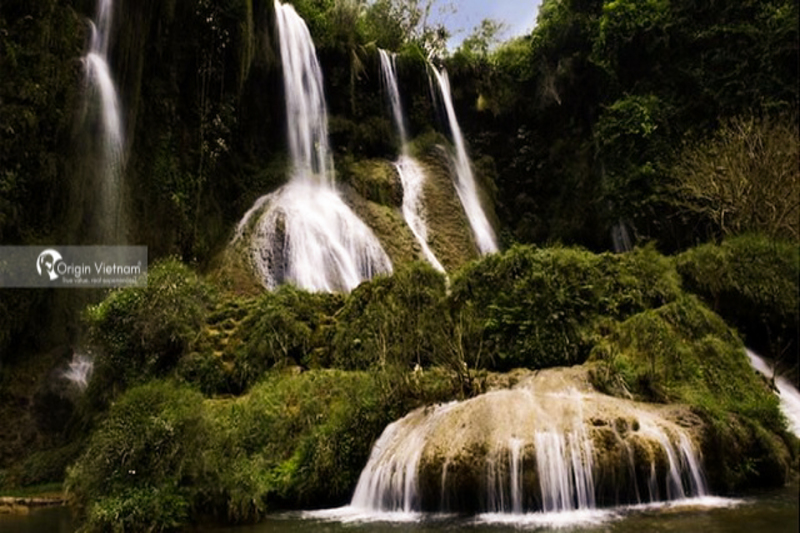 The Dai Yem Waterfall consists of two parts. The upper waterfall is 70 m wide, the waterfall is 150-200 m away. In the dry season, the lower falls only have a flow from a height of 50 m to the bottom of the rock. Two cascades down with a total height of 100m, one side is divided into 9 floors, the other 5 floors.Between the two falls is a flat land for visitors to visit. The vegetation on the top of the waterfall is also quite rich. 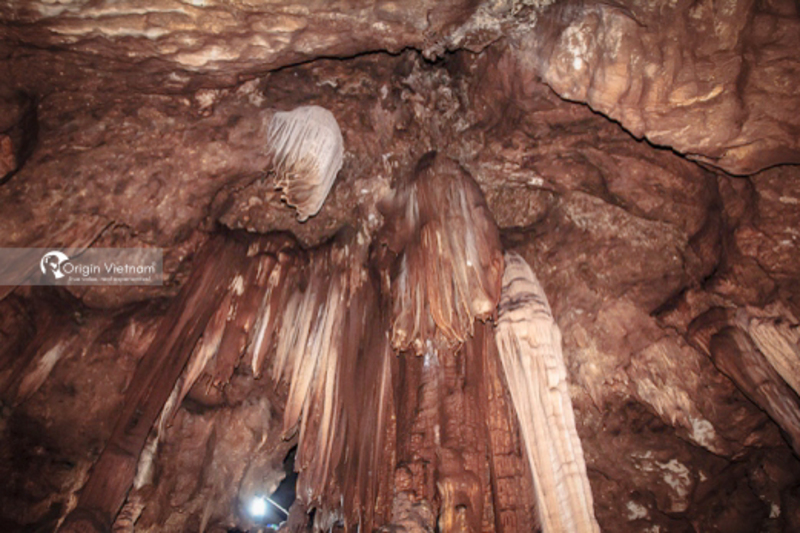 Bat Cave is located on the north-east of Moc Chau Town with an area of ​​6,915 m2. From Ha Noi to Son La Highway 6 located in the center of Moc Chau town. From Highway 6 to the cave we have to climb 240 steps to the cave entrance. The path to the cave is shaped meandering, soothing soothe tired when visitors have to go up.

Legend has it that: From a long time ago. There is a holy dragon fly to the sea. As you fly through this land, see the majestic mountains rich land, cool climate, peaceful sky. So dragon want to live here and then down to live in this place. Today the mountain ranges winding the mysterious colors: white in the morning, blue in the afternoon, bright pink in the afternoon, purple at sunset. It is the dragon body. When the dragon planted, he thanked the land that had nourished the dragon and released seven pearls to repay the land that had nourished him (that is, seven small mountains below the valley today). Seven pearls. This is also the door of the bat.

Ngu Dong is deep in the canyons of Moc Chau. It’s quite separate from the outside. Due to the road to Ngu Dong, also still difficult to maintain the wild beauty.

The five bodies consist of four main moors lying on a hill and an independent cave on the hill side. Five caves are compared with the theory of the five elements, Ion, Wood, Water, Fire, Earth. The stalactite shimmering with many unique shapes, crystallized over thousands of years. The most extensive and the only one is equipped with electrical system by the transmitter, but it is only used on holidays, so you need to have a flashlight when traveling. 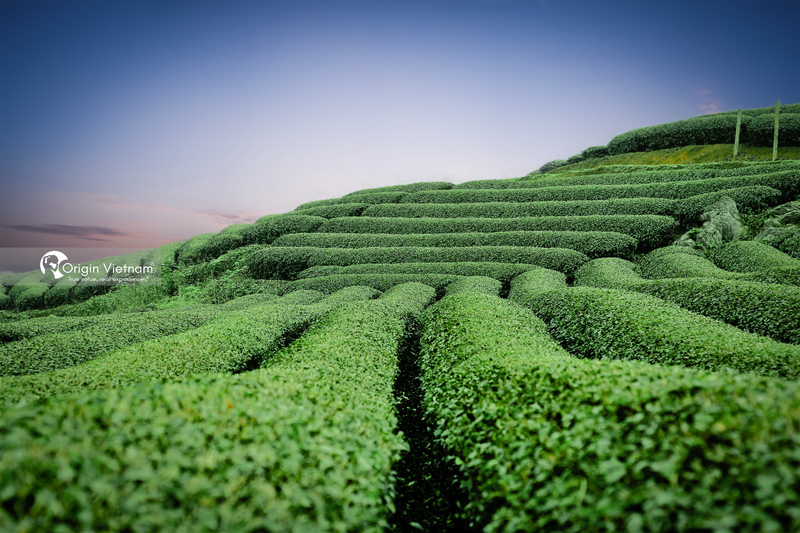 Moc Chau Plateau is famous for its green hills, stretching across the hills. Tea here is grown everywhere, mixed with the beautiful baby. Somewhere in the spring flowers, paper flowers are blossoming in the frosty mist that makes the scene becomes dreamy. Heart of Tea Hill is located on the way to Ngu Dong Ban, about 15km away from Moc Chau Farm.

With a lot of hills, it is difficult to choose a place to have the photos really satisfy. The closest to the town is the tea hills just behind the tea plantations, about 3km from the Cong Doan Hotel. On the way to Ngu Dong Ban is a street with many beautiful tea hills with strange shapes. Such as S shape, wave shape, heart shape… A little further, Tan Lap tea hill from Moc Chau Farm Town nearly 20km. Your vacation in Vietnam will be memorable if you could spend 2 or 3 days tour to Moc Chau. 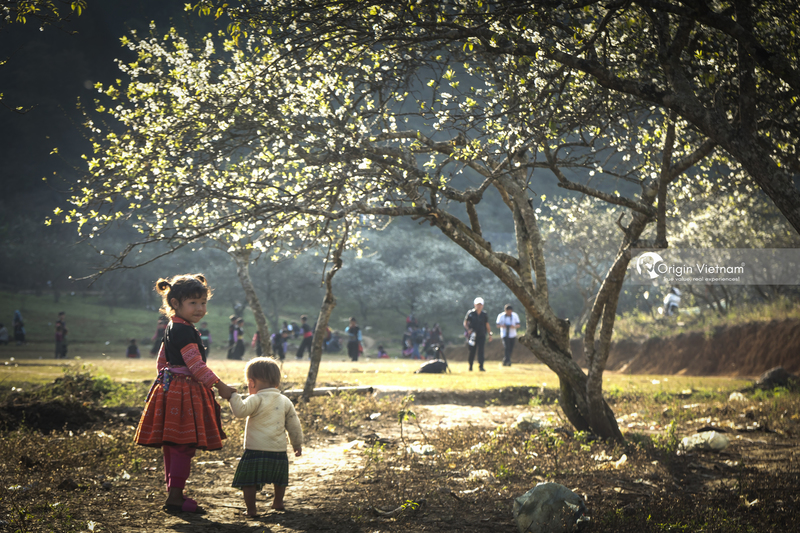 It can be said that Na Ka is one of the most beautiful plums in Moc Chau. So some people have compared here in spring as a beautiful fairyland. In the spring, standing on the top of the pass, visitors enjoy the view of the valley is a beautiful white, beautiful flowers plum stretches wide valley, cliff cliffs, or on the fruit Small hill where we also see the pure white of plum blossom …. 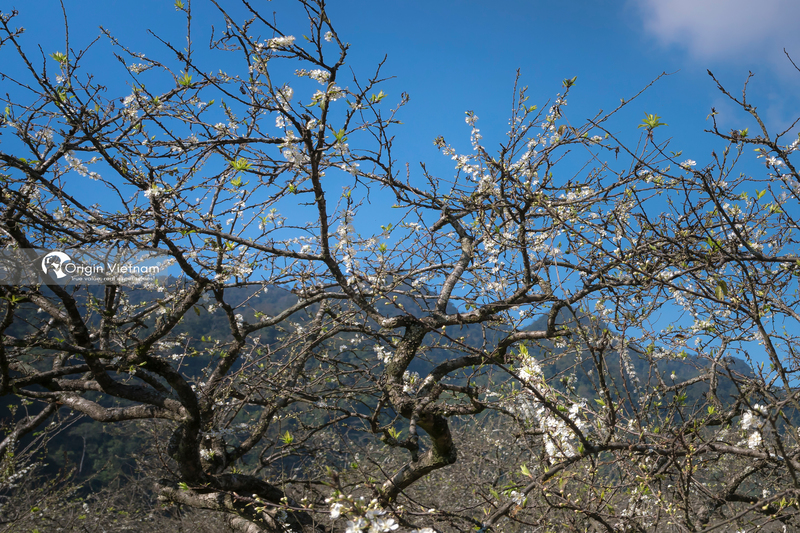 Phien Canh is a small version of the Mong (Tan Lap commune) is very beautiful, simple and colorful in every season. Also located on the road to Heart of Tea Hill, Na Ka plum valley should be quite convenient if you add a little more to Phien Canh. 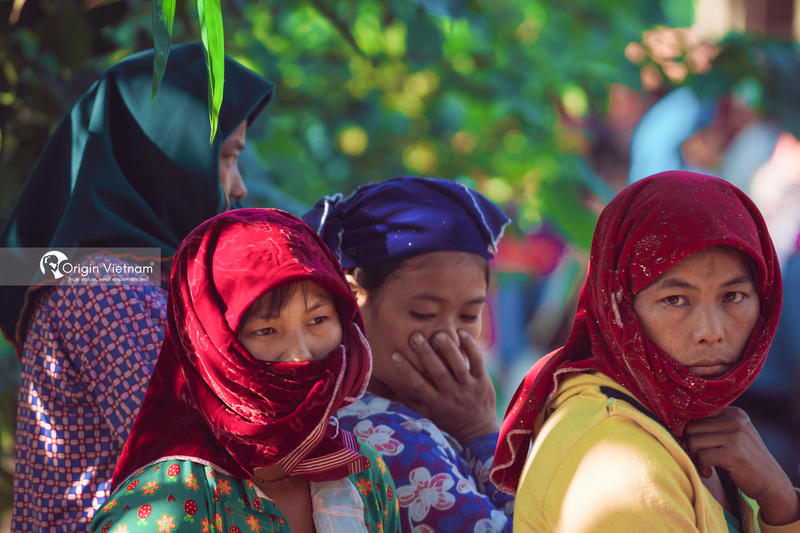 Lao Market at Long Sap Border Gate is about 30 minutes walk from the border. Holidays as usual here are busy people. Visitors to the market are mainly ethnic minority people border the two countries and remote travelers, especially during the holidays, this number has increased. From Vietnam, visitors simply need to do some simple procedures that can step through your land, visit and shop.

Booths constructed from several bamboo bars and canvas are characteristic of the Lao market on the sloping border. Only about 400 m2 so the stalls are stacked closely together with buyers stopping to make the place become more and more crowded. Because of the location of your country, the sellers in this market are mostly Laotian people with traditional costumes.

Follow a small path down the upper slope of the market to find a place to sell traditional foods and household goods. Several confectionery stalls with Laotian labels, a few knives for cutlery and some tools for the farmer.

Chieng Khoa Waterfall, also known as Thac May. It is a name associated with the legend of the Hoa Festival – Xuyen Xuyen. Waterfalls are beautiful as a white band stretching around the deep. 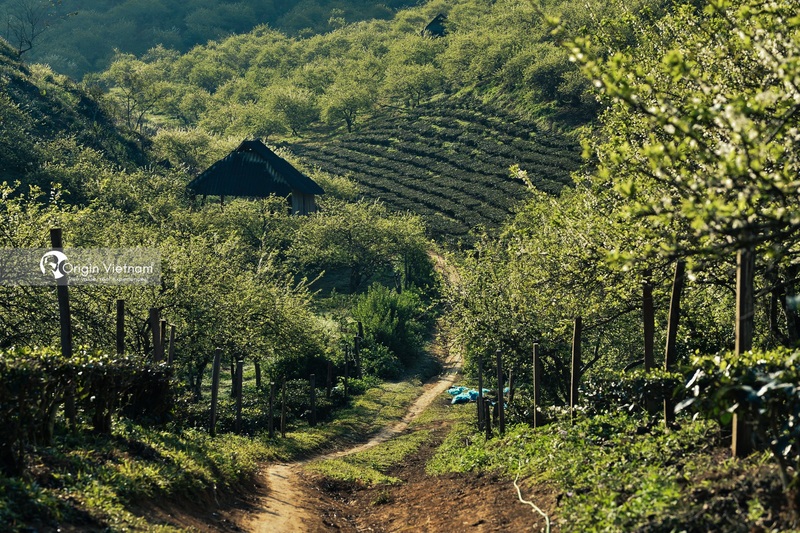 At an altitude of over 2,000m above the sea level. Pha Luong, also known as Bo Lung (Thai meaning big mountain), is considered to be the roof of Moc Chau. located in the east of the district of Tan Xuan Commune, in the border area of ​​Viet. Laos. At the top of the mountain. There is a flat area of ​​about 10 hectares which is suitable for camping or group activities. However, due to security situation, From Laos to Vietnam), camping activities are not allowed overnight.

If You want trekking peak Pha Luong. You will need to ask permission to get to the border. Especially you must have the native people to avoid the road trip. You are only allowed to go a day trip without being extended to the next day. It is a famous place in the route of military operation of the Tay Tien army.

Moc Chau, about 200 km away from Hanoi. It is a rather small town in the northwest mountainous area of Vietnam. This city is a very popular traveller destination. Specially in spring when peach blossoms in bloom. Moc Chau is famous for its beautiful flower fields, green tea plants, fresh milk, and the love market, of H’Mong ethnic minority.
Click Here
Top Recommended

Mu Cang Chai trekking tour 2 days to the hotspot for terrace fields. It is not only the most beautiful for ripe yellow silk from

All Things Need to know before travelling to Son La

If one day you visit the “world cultural heritage Hoi An” and struggled to know what to do. Please refer to the following suggestions to feel more deeply about life and people here.

Get new experience of travel stories and taste local ingredients in traditional and local cuisines. It will take you into stepping of discover hidden of Vietnam!

Things You Should Know About Sapa Homestay