Hang En or En Cave is the third largest cave in the world. After the Son Doong Cave (Vietnam) Deer Cave (Malaysia). Hang En is located in the central area of ​​Phong Nha – Ke Bang National Park, the cave kingdom of Vietnam.

Discovered and published in 1994. Hang En Cave quickly became known and became an impressive destination all over the world. 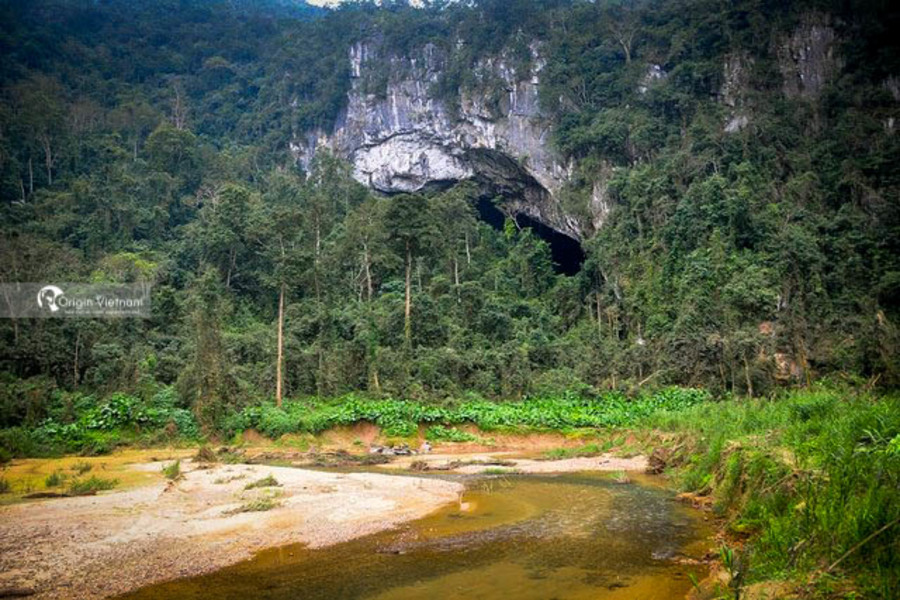 After crossing the primitive rain forests on the limestone mountains. You will find the Rao Thuong Stream bending around the valley. The next route is more than 10km winding along the stream in the clear and cool! Occasionally, you will see butterflies brushing the banks of the stream, making the scene more poetic and inspirational.

Blending into the majestic nature, you return to the wilderness, a world completely different from the reality: the dew drops are deposited on the giant litter, the birds singing The sound of the insects creates a symphony orchestra in the midst of the green mountains. Nothing compares to the wild beauty of nature around you here. From the streams, you will see the En cave gradually appear before your eyes … 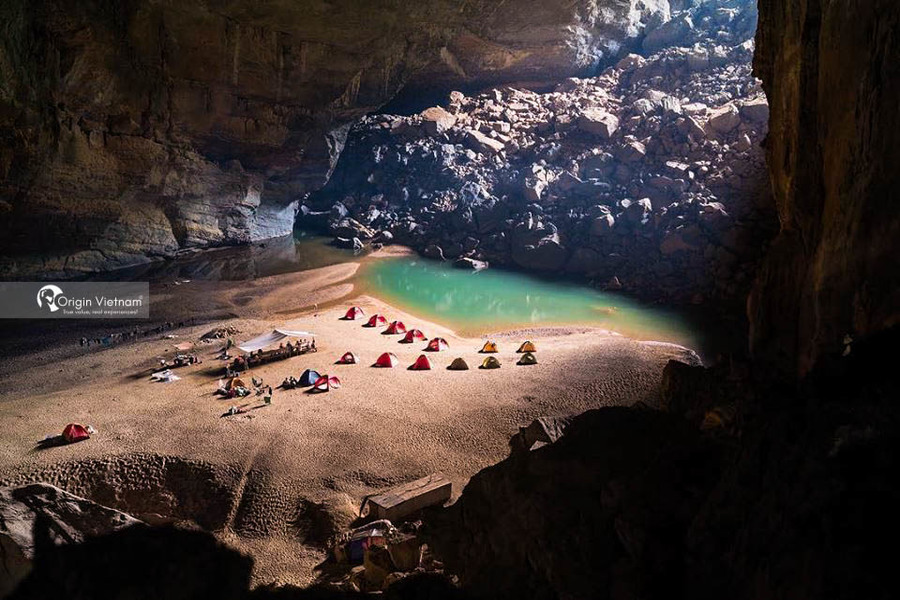 Cross the entrance of En Cave – a wide rift on a raised cliff wall. Then follow the trail and round the huge rocks in the dark. From here you will see on the cliff face with sunlight shining on it. Illuminates the high slope in front of the eyes.

Your reward when climbing to the top of the slope will be the beautiful view of the Hang En campground overlooking from above. White sandy beach wide embracing a small jade lake in the cave Along the white sand beach, colorful huts were laid out before us.

The large cave at the campsite seems to be sealed, however, when crossing a narrow passage, you will reach the back of Hang En. The ceiling is high until you see the outside light shining through the huge sloping wall. The walls are high and dizzy, drawing a supersonic scene challenging imaginative possibilities! This is one of the most beautiful spots in Hang En to take pictures during the journey.

It was surveyed and published in 1994 by the cave experts of the Royal Caves Association, but Hang En has been known for decades by ethnic minorities living in the Phong River National Park. Nha – Ke Bang. The name Hang En originates from millions of swallow nest and live in the cave.

Previously, the villagers around Hang En cave like the Bru-Van Kieu (Dong village) used Hang En as a storm shelter and a gathering point for some local people using forest wires to climb the walls. Rock to catch bird nest as a dish in the area. At present, on the cliffs standing in Hang En, there are traces of solid woods used by local people.

Ho Khanh, who discovered Son Dong in 1990, went through Hang En many times during his search for caves. At present, the approach to Son Dong Cave is the easiest and most convenient way to go through Hang En.

How Big of Hang En Cave? 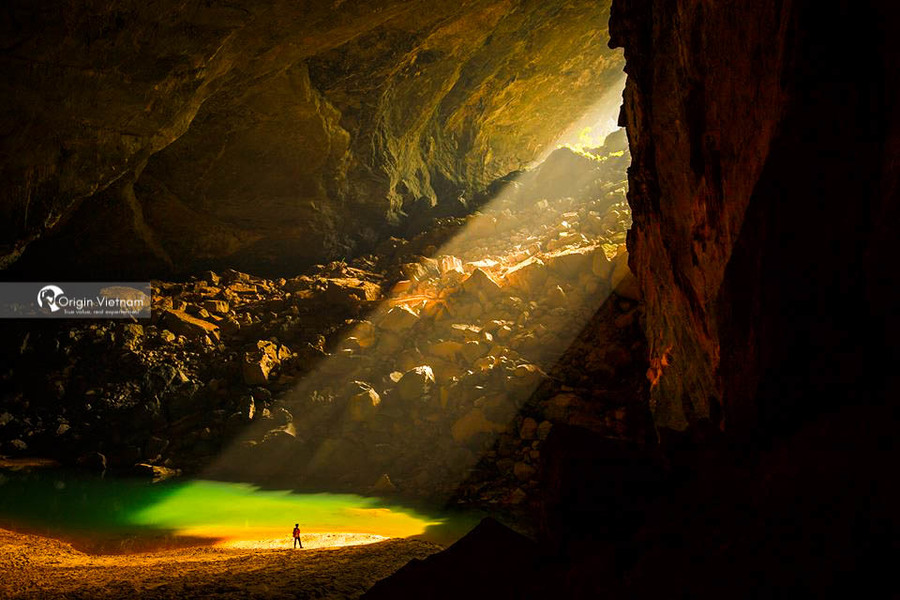 At this time, Hang En cave ranks 3rd in the world with its grandiose size. Hang En stretches over 2km through the huge limestone blocks in the core zone of Phong Nha – Ke Bang National Park. There are 3 entrances to Hang En, the largest and most famous of which is 120m high and 140m wide.

The pristine, dense, primitive forests surrounding Hang En create a spectacular setting that must be witnessed by your newfound confidence. In some other areas of Hang En, the cave arch is up to 100m high and more than 180m wide, so great that the intense light from the professional lights can not touch the cave walls. 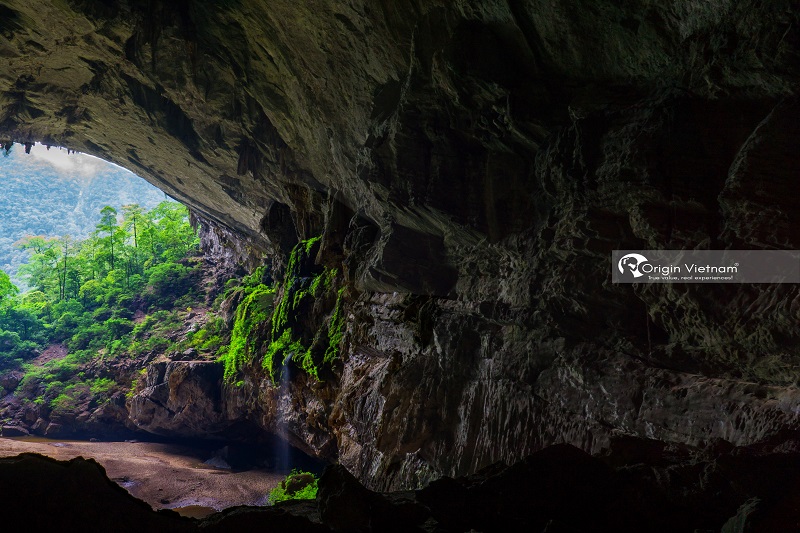 Formed about 3 million years ago due to the stream of Rao Thuong stream flowing through the Truong Son range. The erosion and formation of faults in Phong Nha – Ke Bang mountain. It is one of the oldest limestone blocks in Asia with about 400 to 450 million years old. Hang Formation was later formed due to formation on a fault zone of this limestone massif.

In the rainy season, the Rao Thuong river rises rapidly and enters Hang En before flowing through Son Doong cave, continuing the erosion of limestone cliffs and increasing the size inside Hang En.

To get to Hang En, your Phong Nha-Ke Bang National Park tours will have to visit Ban Doong – a small version of Bru-Van Kieu people with about 40 people living isolated in the core area of Phong Nha – Ke Bang National Park. The life of the people here is very difficult because the terrain is completely isolated from the outside world.

It is worth a visit Hang En cave

Currently, the only way to Ban Doong is to walk to the forest. In addition, because of being located in the core zone of the National Park, the cultivation and exploitation of economic crops is not allowed. The launch of the Son Doong Cave and Hang En cave Hangout on this route has opened up the development opportunities for Dong village, and people living here can earn extra income from working with Oxalis company for sustainable protection. ecosystem of the area.

With the hospitable nature, the people of Ban Doong have left many tourists to visit the impression very nice and become an unforgettable point tours by locals Vietnam. Dong village is a good example of preserving the intangible cultural and spiritual values of ethnic minorities over the decades.

Your tour to Vietnam will be very interesting if Hang En cave tour in you pocket list.

Hang Va Expedition two-day trip is the adventure journey at Phong Nha Cave system. Reality, it shows you the perfect vacation to discover this famous

With a short time within one day. Tu Lan Cave tour full day experience will give you a view of jungle and limestone trekking at

Having 1 day trip to discover the underground Phong Nha Cave by kayak, you will be amazing for its unique. Kayak upstream Son River you

Hang En or En Cave is the third largest cave in the world. After the Son Doong Cave (Vietnam) Deer Cave (Malaysia). Hang En is

Phong Nha Builds The Longest Zipline In The World