In Po Nagar tower (Po Nagar) is a Cham temple on the top of a small hill. It’s about 10-12 meters above sea level. Cai River (Nha Trang River) in Nha Trang, about 2 km north of the city, now in Vinh Phuoc.

If you have chance to visit Nha Trang. so tour Nha Trang to Po Nagar tower is one of the top vacation sport should not missed.

How Po Nagar Tower is unique?

Follow Origin Vietnam team to find it our why the Po Nagar we need put in our travel pocket list.

The name “Po Nagar Tower” is used to refer to the whole structure. But it is actually the name of the largest tower about 23 meters high. This temple was built during the Hindu (Hindu) period. Which was flourishing during Champa during the period known as the United Kingdom, so that the goddess had the shape of Umar, wife of Shiva. 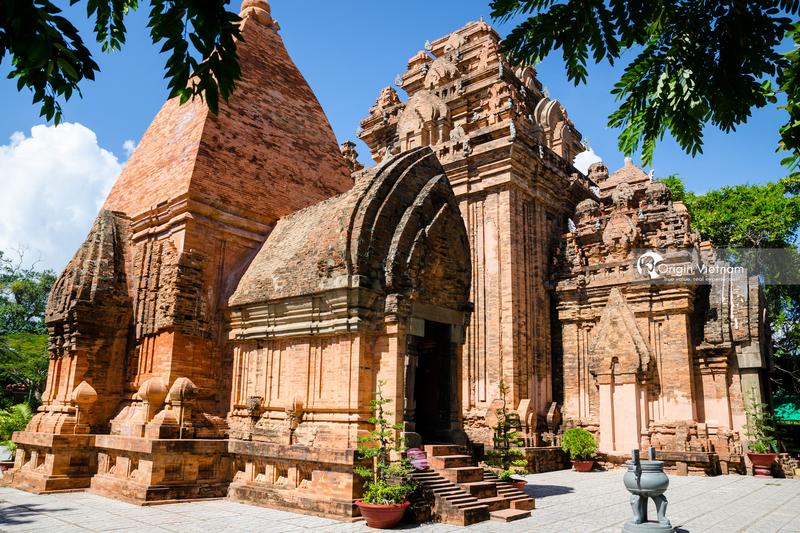 King Po Ina Nagar (also called Yan Pu Nagar, Po Ino Nagar, or Black Lady, which the Vietnamese call the Divine Model Ana) is a goddess created by clouds and sponges, the creator of the fruit. Land, produce precious wood, trees and rice. She has 97 husbands, of whom only Po Yan Amo is the most respected and respected.

She has 38 daughters, all of them are goddesses, including three people Cham people have chosen to protect the land and worship to this day: Po Nagar Dara – Goddess Kauthara (Khanh Hoa ); Po Rarai Anaih – goddess Panduranga (Ninh Thuan) and Po Bia Tikuk – goddess Manthit (Phan Thiet).

Legend has it, Thien Y Thanh Mau Ana according to the traditional belief of Cham people, no clothes. Po Nagar is now used by the Vietnamese, but for the goddess dressed in a Buddhist style. The temple is also famous for its visitors. 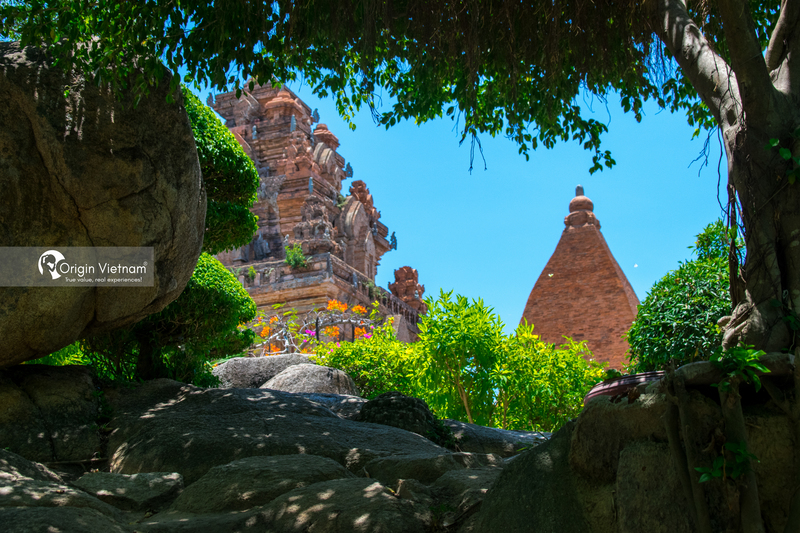 The wooden tower formerly dedicated to Princess Jagadharma (Princess Tchou Koti or Divine Mother of God) (ruled from Lam Dong from 646 to 653). It was rebuilt by hardwood materials at Aya Tra (Nha Trang) by Prithi Indravarman. Location on a high hill next to the mouth of the Cai River (Hamlet), to worship the goddess Bhagavati (in gold). In 774, South Vietnamese troops (Java, Indonesia) took over.

The Po Nagar Temple, destroyed by the South Vietnamese forces. Then reconstructed by Satyavarman brick in 784, and completed to the present day, but has also been devastated. Later King Harivarman 1 and his son Vikrantavarman 3 could later have built five further towers.

The remaining inscriptions in Po Nagar show the traces of a mighty nation that has existed in the past. 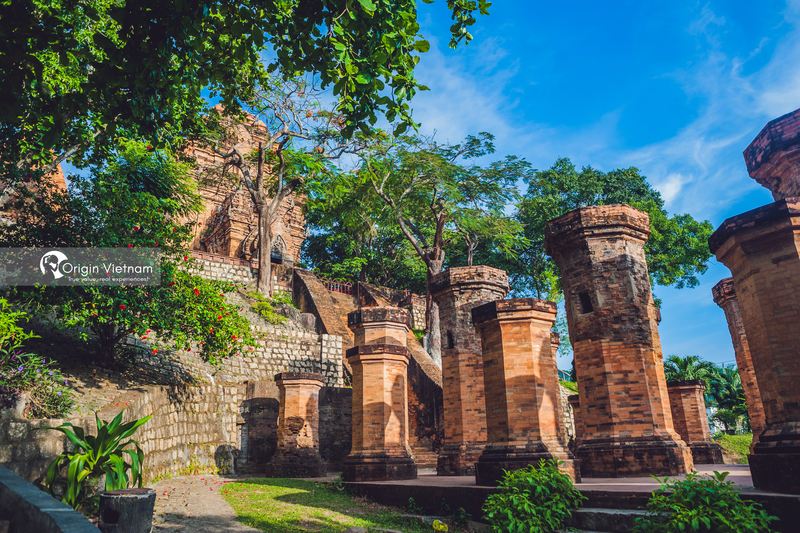 The architecture of Po Nagar consists of 3 floors, from the bottom up.

Lower level: The horizontal ground is the gate tower that is no longer there. From there the stone steps lead up to the middle floor.

Middle: There are only two main octagonal octagonal bridges, each with 5 m in diameter and over 3 m in height. On the two sides of the large columns are 12 small and lower columns, all on a brick floor higher than 1 meter. Based on this structure, it is said to be a large building with a tiled roof. Where pilgrims take a break and make offerings before offering them at the above. From this middle floor, there is a steep staircase leading up to the top floor.

Uppermost: The place where the towers were built, in front of the main tower. These steps have not been used for a long time. The stone steps of the bee found now in the south of the larger Baal Tower were built in the 1960s due to increased tourism demand.

Upstairs, there are two tower blocks surrounded by four stone walls that now only remain in the west and south walls only. The front tower has three, and the rear has three traces, but now there are only 1, they run parallel. The remaining 4 towers were built in the Cham style, brick built very tight, not see the adhesive. The hollow tower to the top, the tower door to the east.

The outer surface of the tower has many edges, cylinders, battles. At the top of the pillars, often decorated with decorative domes, looks like a small tower placed on a large tower. On the body of the tower there are many statues and reliefs of terracotta, including Po Nagar, Tenexa gods, fairies, animals: deer, yellow goose, lion… 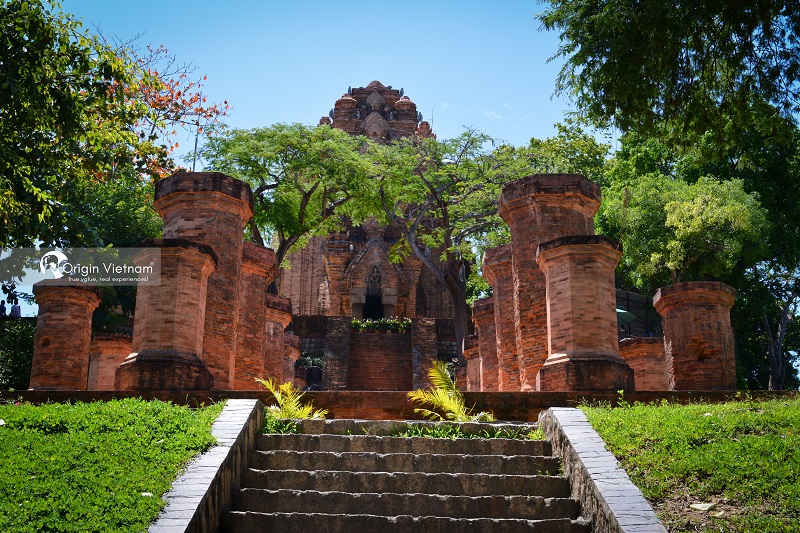 The main tower in the front row is quite large and about 23 meters high, Po Nagar tower, which we often call her tower. Originally worship tower Parvati, wife of Shiva. Po Nagar (Umar), the wife of Siva. Tháp Bà built 4 floors, each floor has doors, statues and stone animals, in four corners have 4 small towers. Inside is a statue of goddess (2,6 m high) carved in black marble (previously incense wood, and further in gold) on the majestic stone statue of lotus, stone back large leaf shape Bodhi.

This is a masterpiece of Champa sculpture, a harmonious combination of circular and sculpture techniques. The French have taken the head, now only the head with cement painted face. Scattered around the ruins also have a statue of people, animals … At the top of the tower is the statue of god Shiva Nandin, and the mascot such as swan, goat, elephant etc. The exterior of the tower is decorated with stone carvings such as dancers, sailors, rice mills or hunters with bows.

The east door leads to a foyer, on two sides of the door, with two engraved stone pillars, supported by an engraved stone tablet depicting the goddess Durga dancing between two musicians. Inside the tower is dark and cold. At the end of the tower there is a stone altar under the Ba Po Nagar statue with ten arms.

His lower hands rested on his knees, and the other hands held swords, arrows, maces and javelins in his right hand, and bells, plates, bows and jugs, and on the left. Supported by an engraved stone tablet depicting goddess Durga dancing between two musicians. 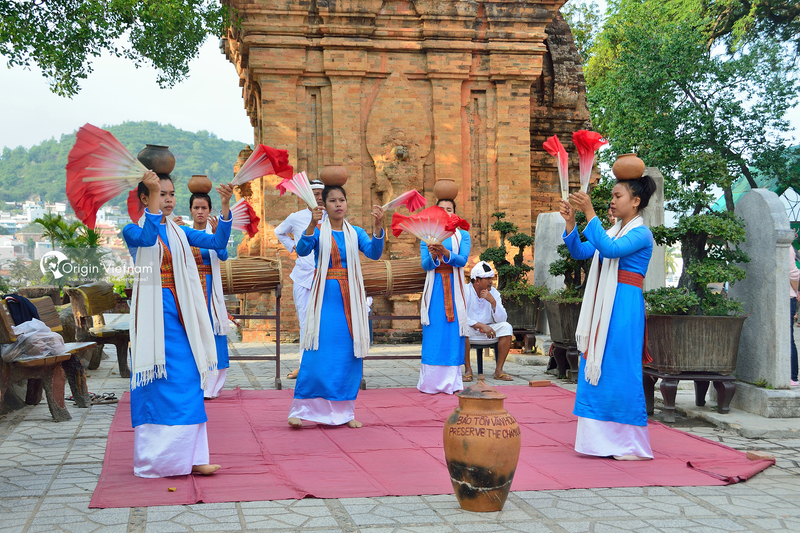 Inside the tower is dark and cold. At the end of the tower there is a stone altar under the Ba Po Nagar statue with ten arms. His lower hands rested on his knees, and the other hands held swords, arrows, maces and javelins in his right hand, and bells, plates, bows and jugs, and on the left. Supported by an engraved stone tablet depicting goddess Durga dancing between two musicians. Inside the tower is dark and cold.

At the end of the tower there is a stone altar under the Po Nagar Tower statue with ten arms. His lower hands rested on his knees, and the other hands held swords, arrows, maces and javelins in his right hand, and bells, plates, bows and jugs, and on the left.

The other towers worshiped Siva (one of the three supreme gods of Hinduism), god Sanhaka, god Ganeca (legendary son Siva). Next to the main tower about 20 meters south is another small, less sculpted tower, about 12 meters high, possibly the shrine of Shiva. The south tower is also a smaller tower.

It is worth a visit Po Nagar Tower

Inside the tower there is no altar but only a linga, and this is the god Ganesa, elephant’s body, son of Shiva. Some authors argue that linga is a penis-shaped idol representing Shiva, which is based on a sexual interpretation of the West.

In fact, linga is represented by a low pillar with three different parts representing the three bodies: the lower part is the square representing Brahma, the middle part of the octagon represents Vishnu, and the top of the circle represents Rudra (also known as Shiva). So called “cylindrical cylinder” is more appropriate.

In the rear tower there is a tower, relatively less damaged in the north, with a saddle-shaped roof. This type of roof is only seen starting in the towers of Do Ban – Vijaya (Binh Dinh today) after the capital was moved from My Son, Tra Kieu in the 11th century. At the wall there are sculptures such as the god Garuda lions, Apsara fairies, Naga snakes.

It was in the background of this tower that while renovating the early 20th century, the French explored and took a hidden treasure of gold and silver offerings. 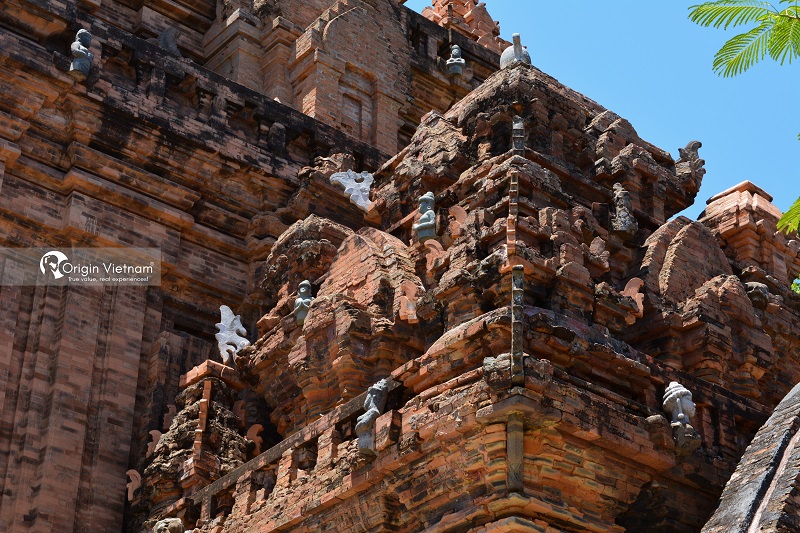 Today, two other towers in the southwest are destroyed. This distribution makes an interesting comparison with the brick towers of Lolei, near Angkor Wat in Cambodia, which was built in the 8th century.

The Cham tower was built and renovated over many periods from the 7th to 12th century. The tower can be built by King Harivarman I in the years 813-817. Experiencing the sunshine of time, the tower is damaged. During the French colonial period, the Far East Uncle retained the restoration. It’s using bricks rebuilt many parts and embossed a number of statues on the tower. During the war, many artifacts were stolen.

Nha Trang is the popular destination in Vietnam for beach lovers. Nha Trang Snorkeling and Scuba Diving full day will bring you the chance to

Nha Trang city half day tour will take you insight into some of Nha Trang’s most important architectural, cultural and historical sites of the city.

Vinh Hy Bay Snorkeling 2 days from Nha Trang will be the chance for you to enjoy its beautiful coral reefs, snorkeling and diving at

All Things Need to know before travelling to Nha Trang

Activities at Ninh Van Bay 1. The game at sea If you want to experience Nha Trang tourism in Ninh Van Bay. This place will

Weekend to Binh Hung island swimming, sunbathing, eating seafood, the scene is super nice but the cost is super cheap. What are you waiting for?

Mui Doi or Eastern Point of Vietnam located on Hon Gom peninsula, Van Ninh, Khanh Hoa. It is the eastern point on the mainland of

Blogs pot & review. That you can get new experience of travel stories and taste local cuisines. It will take you into stepping of discover hidden sites of Khanh Hoa, Vietnam!

Travel To Nha Trang To Get Unique Experiences

Suggest a Vacation in Cam Ranh During Tet