Tan Ky ancient house was built by an ethnic Vietnamese family more than 200 years ago. This gem house has been preserved through seven generations of the Le family. The original set up is Mr Le Tan Ky – the second generation named for this house and business shop. 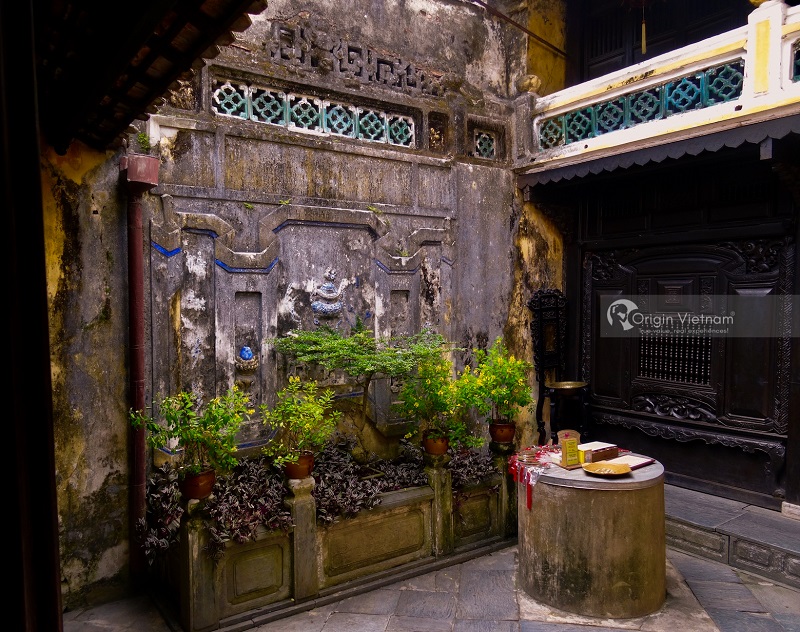 Built in 1741, and since Mr Le Tan Ky generation, the house was used to trade agricultural products. In the main gate of the house is Nguyen Thai Hoc streer and the back is Bach Dang street. This back gate is facing to Hoai River and very convenient for transferring goods on the river. Since the past, Hoian was the busy international trading port with many different countries such as Japanese, Chinese, Portugal, ect. Therefore, the location of Tan Ky house is very convenient for trading.

Passing a long time, the house has suffered by floods which are famous of Central land of Vietnam. Especially, the food in 1964 reached the first floor of the house which you can see its level once visiting it as well as other flood level which is marked on the wall at the souvenir shop area. Although it has many floods, the house still remains miraculously its original over the years.

Although Tan Ky old house isnot the oldest one in Hoian, it is one of sample of old house remain as original with architecture, objects from household kept here from generations perfectly. That is why it is pointed as “Cultural work” by the Ministry of Culture and Information in Hoi An since 1985. 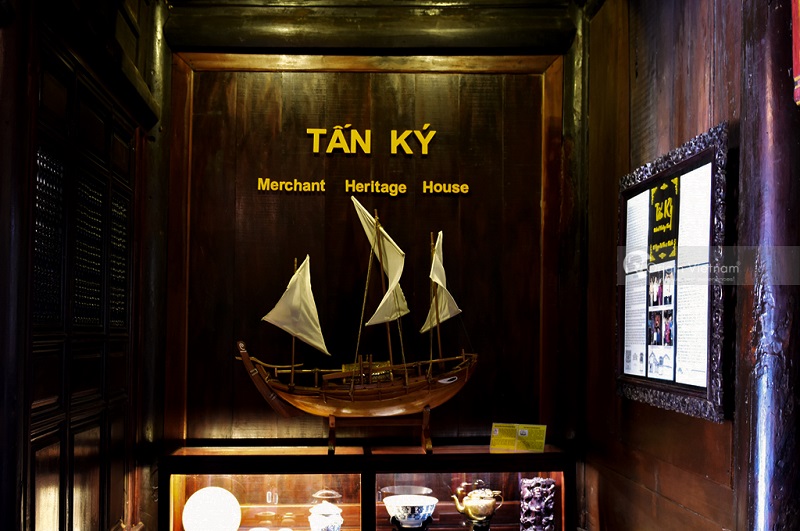 Tan Ky ancient house is the combination of the Chinese, Japanese and Vietnamese architecture in building. By building in the special style, it consists of two overlapping columns which symbolize for the relationship between heaven and human being. The five vertical columns like five fingers and it symbolizes for the five elements in the nature.

And the house also owns its typical tubular architecture which is famous in Hoian ancient town. The house has no window; therefore, this architecture is the best way to get the light for the house. That is why once you get into this old house, there is no feeling of stuffy at all.

For building the house, wood is the main material. Furthermore, there are rocks and floor tiles. The rocks were brought from Thanh Hoa Province. And the floor tile was from Bat Trang ceramic village. By this way of building and material, the house is cool in the summer and warm in the winter. Especially, this house was built without using any nail. However, the house still remains its self-standing until now.

To build the house are the skillful artisans at the famous Kim Bong village in Quang Nam Province. This village once you visit Hoian you can visit this famous carpenter one by boat or car. All textures, patterns, and structures in the house have meanings and messages of Oriental philosophy. 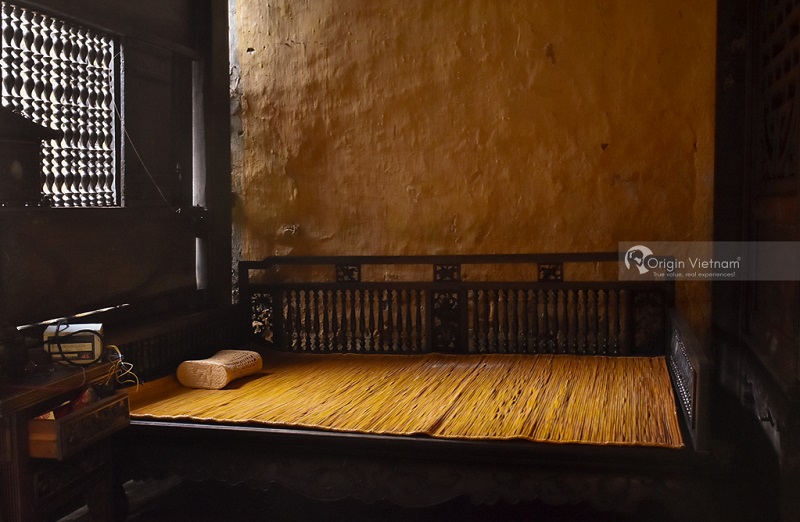 The Japanese architectures shows in the ceiling, right in the sitting area, which is supported by three progressively shorter beams, one on top of the other. Under the crab-shell ceiling are carvings of crossed swords wrapped in silk ribbon. The swords symbolize for the force while the silk represents flexibility.

When entering the house, the interior shows you few details for Chinese architecture. The poems in Chinese were written and hang on the columns that hold up the roof. The house keeps the parallel set by poem in Chinese. It was written by one hundred letters on a wooden panel and each letter looks as the bird is flying.

And the carved wooden balcony supports around the courtyard. And it was decorated by grapes leaves which from Europe. This can be said that the harmony and and blending cultures in Hoian 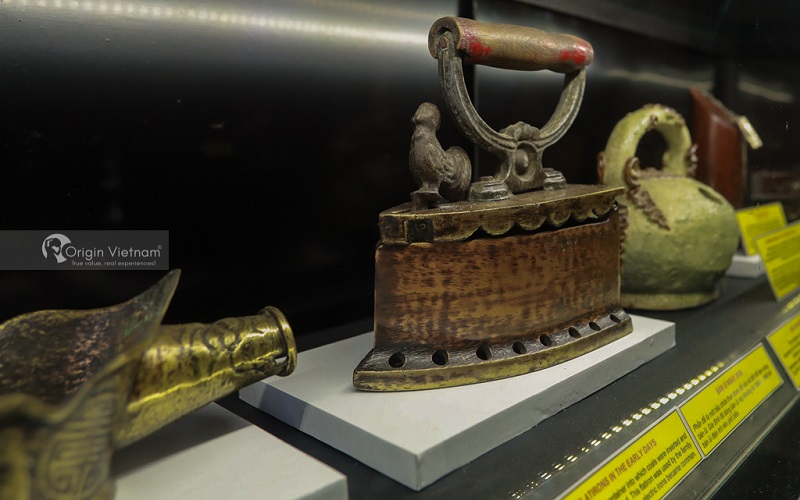 What to See and Do at Tan Ky Ancient House?

Tan Ky ancient house has reserved many horizontal lacquered boards such as “Tích đức lưu tôn” (teaching the children to keep virtue for the following generations); “Tâm thường thái” (keep the mind to always be quiet).

When you get inside, the first apartment is the place where artifacts and sailboats are exhibited. This symbols for Hoi An Trading Port 400 years ago.

As referred above, the special of the house is the horizontal lacquered board “Bách Điểu ( One Hundred Birds). The archaeologists considered it a unique one in Vietnam. It is written in 100 letters, each of them is as a bird is flying.

Once get inside the house, you can see a shiny black bed, which was carved carefully. Or you can see the base of a flower vessel is carved elaborately. These show ancient furniture remaining carefully from the family as well as the rich time in previous.

Factually, the house still remains a unique artifact “Confucius Bowl” – an invaluable treasure tied to the ancient remnants of Confucius. Yes, It recommends humans to refrain from their behaviors and should keeps themselves in a neutral state, not outrageous activities.

At the house there is a stela with the inscription of Mr. Le Tan Ky Stele, who set up Tan Ky business. It summarizes the story of an orphan boy Cong by his own self-independence that becomes the person of fame, loving, helping the poor and the respect all people.

Visiting the house you can also have chance to buy some souvenir gifts right in the house. The house has two cute little corners of homeowners where exhibits small gifts of tourists as a souvenir gift.

Especially, this ancient house also has a space for tourists all over the world to leave their card as the way to know their memories when visiting the old house.

How to Get to Tan Ky Ancient House?

When you are in Chua Cau Hoi An (Japanese Bridge), you follow along Bach Dang Street to Nguyen Thai Hoc Street. This distance is not far, it is easy for you to walk slowly to enjoy the beautiful scenes on streets.

The best time to visit Hoi An from February to April when climate is cool and sunny. Hoi An seems the most beautiful, and the most sparkling city at this time.

The rest you can have hot time from June to August. Or sometime have rain from September to November and a little cold from December to January.

You should wear polite costumes because there are many pagodas, temple and ancient houses as the family one. In the past, there were many cases where visitors were refused to visit because they wore clothes that were too short and impolite.

Hoi An to Hue tour 3 days and crossing Hai Van Pass is one of the most breathtaking routes in Viet Nam. You will have a

All Things Need to know before travelling to Hoi An

Hoai River Square has a large campaign with area of 01 hecta. It stretches along

If one day you visit the “world cultural heritage Hoi An” and struggled to know what to do. Please refer to the following suggestions to feel more deeply about life and people here.

Walking Under The Sea Of Cu Lao Cham

Photos Must Have When Traveling To Hoi An