The Folklore Museum of Hoi An takes you to a completely different space. With art and cultural artifacts, preserving cultural values ​​over 2000 years. If exploring Hoi An Ancient Town and not visiting the Museum of Folklore, then you do not understand all of Hoi An.

How the museum of folk culture is unique?

It is located at 33 Nguyen Thai Hoc. The museum is the largest ancient house in the Ancient Urban with a length of 57 meters and a width of 9 meters. The two floors with the wooden floor through both sides of Nguyen Thai Hoc and Bach Dang streets. It is considered as a special and rare cultural institution in the area. By original images, artifacts and demonstration activities at the Museum of Folk Culture.

It expressed the intangible cultural values, introduced the thickness of cultural traditions, creativity, the contributions of generations of residents in the process of building and developing the land of Hoi An.

This is the first museum in Vietnam to concentrate especially on the topic of Vietnam cultural tours and rural dwelling. 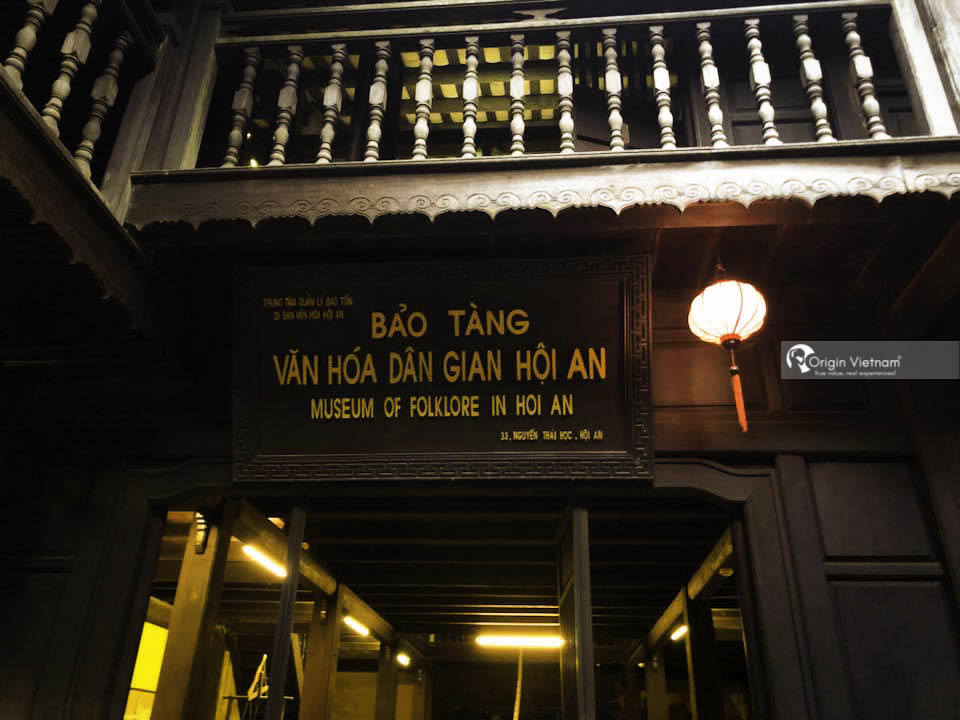 Top things to do in Museum of Folk Culture

On the first floor, there are quite a variety of live performances illustrating the values of Hoi An Folklore.

On the second floor, with an area of 369m2, the museum displays 483 artifacts with 4 main topics:

Folk art in Hoi An is expressed through sculptures, carvings on wood, porcelain reliefs, worship statues, statues made of bronze, compound, wood, terracotta, types of water paintings, colour paintings, diaphragm, mosaic, nacre, snails, etc. These works are currently stored, decorated in many families, many religious relics – beliefs to beautify the beauty of Hoi An Heritage. Thereby contributing to the sophistication and talent of generations of local folk artisans in this field.

Thien Cau dance is a very special kind of mascot dance, handed down in Hoi An for a long time and left a deep impression in the hearts of many people in Hoi City. The memories of the Mid-Autumn Festival of many generations of the residents here will be poorer without the echo of Thien Crane dance. The sparkles of the lanterns of pudding, stars and heads of Thien Cau bustled together under the full moon in August to flow smoothly through the streets … Through development, Thien Cau dance gradually became a typical folk dance in Hoi An. It associated with the meaning of exorcism, blessing, praying the bright moon for a good harvest, prosperous people.

Singing Ba Dao is a popular folk performance of Hoi An fishermen in particular and the Central Coast in general. Currently, this style of performance is still reserved in the locality. Besides, it is held regularly on the occasion of the annual fishing or fish sacrifice ceremony. According to some elderly artisans, Ba Dao has been present in Hoi An for a long time. Ba Dao singing is a singing style with oars, describing the movements of swimming boats or boating. The lineup consisted of three or four masters and the rowing companions of 10 to 16 people depending on the arrangement of each rowing team. It plays an important role in the spiritual life of Hoi An fishermen.

This is an activity that both shows the regret and respect for Mr. “Ngoc Lan Nam Hai”, the god who helped them in times of tribulation at sea. In additions, praying for peace in the immense waves, wishing for a good crop year, abundant seafood.

Bai Choi is a popular folk game circulating in Museum of Folk Culture Hoi An as well as some localities in the Central. This is a unique, attractive folk game, attracting a large number of players from the countryside to the city to participate. Especially on the Lunar New Year as well as on major festivals. The deck of cards is made from the next deck of cards, affixed to bamboo or wood cards. These include two types: a large card, three-card cards to be played to the player, a small card, and a card used for the dealer withdraw and sing. Each card has its lyrics to express, is performed very methodically, fun and lively.

In the past, playing card halls were usually held in public places such as communal yards and large yards. And it includes two rows of huts for players and one hut for the organizers as well as for people to sing and act. Recently, this game is restored on the streets of the old town weekly, monthly, attracting a large number of players of all ages.

Hoi An is famous for many traditional craft villages. And in this museum, you can immerse yourself in that village space such as Trade-in Hoi An, Farmer, Traditional medicine, Kim Bong carpentry, Pottery Nam Dieu – Thanh Ha, Tailoring. Especially, with traditional sewing, you can experience fast sewing service and bring back unique tailoring works as a souvenir for your trip. With the value above that the reason why Museum of Folk Culture is one of the most interesting sightseeing in Hoi an Vietnam. 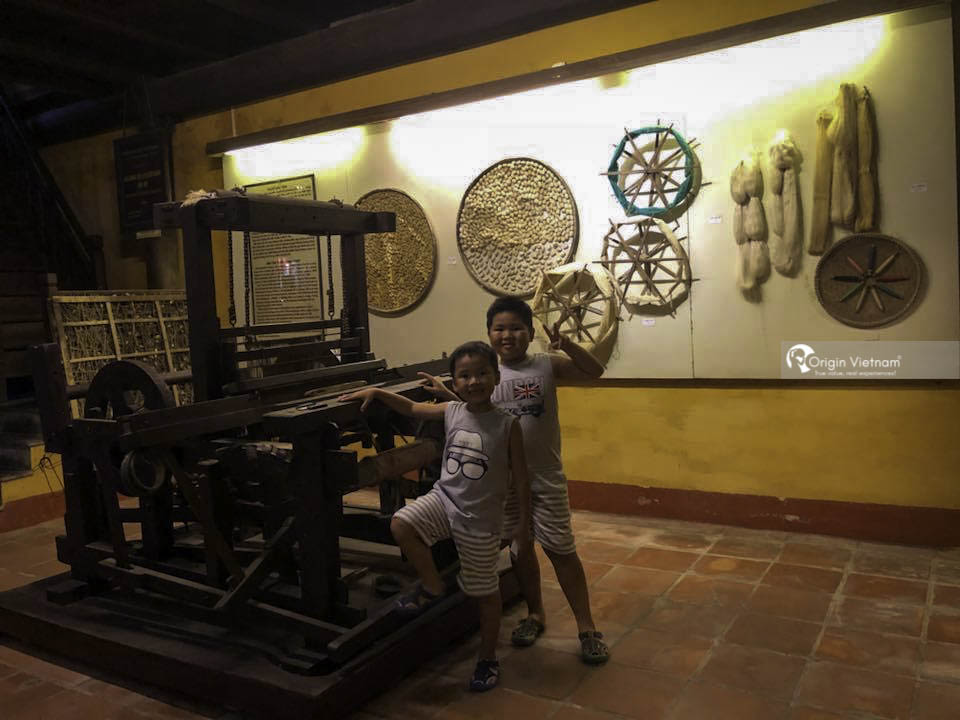 The museum displays traditional costumes in Hoi An creating a colorful space. Wedding customs in Hoi An or Traditional clothes in Hoian. Coming to Hoi An folklore museum, you will be immersed in a traditional space that is hard to find anywhere else!

How to go to Museum of Folk Culture?

Cars and airplane are the two main vehicles that will take you to Hoi An. However, if you go by plane you will have to go to Da Nang airport, then take a bus, motorbike or taxi to Hoi An. From Danang, It takes nearly 50 minutes to Museum of folk culture Hoian.

When is the best time to visit the museum of folk culture?

Owning two-season climate, it is obvious that Hoi An tour in the dry season (January – July) will be more preferred in the rainy season. In particular, the most ideal time is from February to April, when the climate in the spring and early summer, the weather is cool and the sun is not too harsh.

Or you can still choose to come to Hoi An during the rainy season (August – December). The climate in Hoi An is generally quite mild, not much influenced by storms or high-temperature differences between seasons. However, it should be noted that rainfall in Hoi An is quite persistent, and sometimes it will cause floods. Every season has its own impressive experience.

Hoi An Folklore Museum is open from 7:00 to 21:00 every day of the week. Particularly on the 20th of every month, the museum is closed to perform professional work. So you should arrange your travel schedule so you do not miss this fascinating destination!

Dont for get to check all need to know and things to do in Hoi An at Origin Vietnam. If you have any enquiry for your Hoi An trip let contact us at sales@originvietnam.com

How is the beautiful silk shirt made? This trip will answer your question when you visit silk village. It will show you the chance to

Photos Must Have When Traveling To Hoi An

Top 8 Interesting Things To Do In Hoian