Origin Travel would like to introduce the Temple of Literature – The first university in Vietnam to you. Invite you to see through.

How the Temple of Literature is unique?

Considered to be the first university in Vietnam. Van Mieu – Quoc Tu Giam relics area is located in the south of ancient Thang Long capital. The Temple of Literature – Quoc Tu Giam is now recognized by the Prime Minister as a special national monument.

Khue Van Cac at Van Mieu – Quoc Tu Giam was chosen as the symbol of the Capital according to the Capital Law. Eighty-two steles written at the Temple of Literature – Quoc Tu Giam are recognized by UNESCO as Documentary Heritage and recorded in the list of Global World Memory.

These things have shown that Van Mieu – Quoc Tu Giam is not only a valuable asset of the Capital but also it has become the property and cultural heritage of humanity. Over the years, the Temple of Literature – Quoc Tu Giam becomes a spiritual monument.

It is a symbol of wisdom and a studious tradition, given special attention by the authorities, creating many conditions to become a monument. An attractive place for domestic and foreign visitors once arriving Hanoi city. 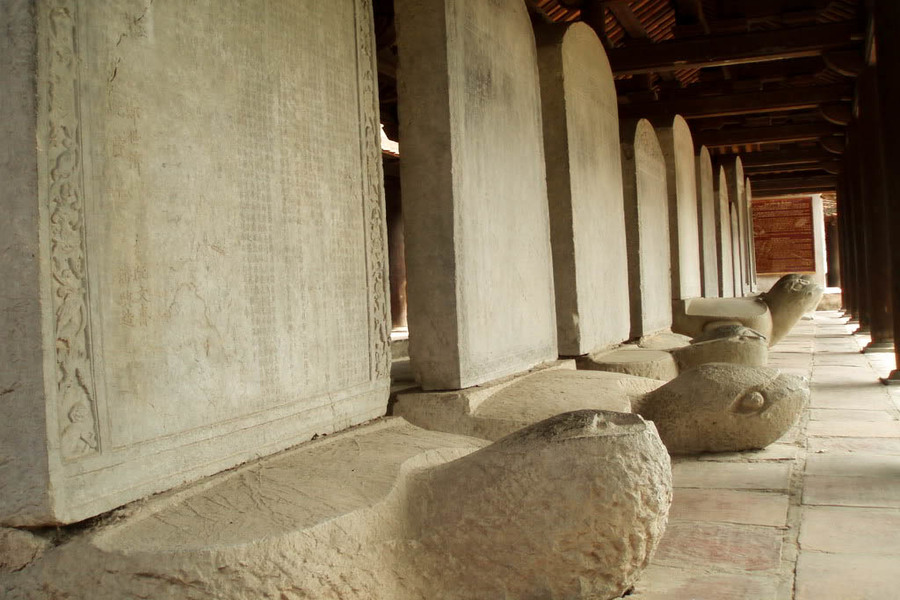 Top 5 things to do in the Temple of Literature

The main gate of the Temple of Literature is built in the style of Tam Quan, on which there are three words “Temple of Literature” in ancient Chinese characters. Van Mieu has walls built of bricks. Inside, there are also dividing walls into 5 zones, each area has separated walls and gates.

Starting with the main gate of the Temple of Literature going to the gate of Dai Trung Mon, the two sides have small gates of Thanh Duc Mon and Dat Tai Mon.

From Dai Trung Mon to Khue Van. Khue Van the architectural works are not massive but they are harmonious and beautiful. The architecture consists of 4 square pillars (85cm x 85cm) below which support the upper floor, with beautiful wooden structures.

Upstairs there are 4 round doors, railing and simple wooden roof supporters. Double-layer tiled roofs form an 8-roofed building, the roof edge and the flat roof surface.

The loft is an eight-floor square roof, on the four sides of the attic is the round window shaped like the sun’s rays. On the left and right of Khue Van Cac are Bi Van Mon and Suc Van Mon leading to two stele houses of Dr. Khue Van Cac in the Van Mieu – Quoc Tu Giam has been recognized as a symbol of Hanoi city.

3. The Third area –steles of Dr and Thien Quang Well

Contains Thien Quang Tinh lake (meaning the well illuminates the sun), has a square shape. On both sides of the lake is the stele area for doctors. Each stele is made of stone, engraved with the names of the poets who passed Trang Nguyen, Bang Nhan, Tham Hoa, Hoang Giap, Tien si. The gravestone is placed on the back of a rock turtle. There are still 82 stelers of the examinations from 1442 to 1779. These are the most precious relics of the monument.

This is the central area and the main architecture of the Temple of Literature consists of two large works arranged in parallel and successive. The outer building is Bai Duong, the inner court is Thuong Cung. This is the area worshipping Confucius and Tu Phoi (Nhan Tu, Tang Tu, Tu Tu, Manh Tu).

The new Thai Hoc building area was rebuilt in Hanoi in 1999. In this fifth area, there is also the Tien Duong – Hau Duong house, which is the place of worshipping the King Ly Thanh Tong, Ly Nhan Tong, Le Thanh Tong and Quoc Tu Giam Chu Van An.

When is the best time to visit?

Currently, Van Mieu Quoc Tu Giam Ha Hoi has become a popular tourist destination, so it is always open on all days of the week, including holidays and New Year to serve the needs of domestic and foreign tourists. However, opening hours are not permanent, may vary by season.

Cold season (from October 16 to April 14 next year), visitors can visit the Temple of Literature from 8 am to 6 pm. 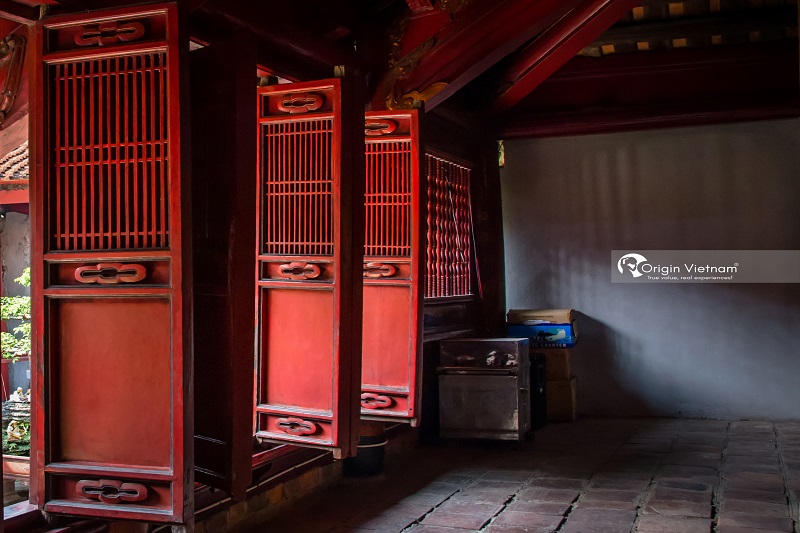 How to get to the temple of literature?

The Temple of Literature is located in Dong Da District, Hanoi, in the middle of the four main streets including Nguyen Thai Hoc, Ton Duc Thang, Van Mieu and Quoc Tu Giam. Travelling to Hanoi for thousands of years of culture, this is definitely a place you should visit.

If starting from Ho Guom, go along Le Thai To Street, turn right to Trang Thi Street, go to Cua Nam and Nguyen Khuyen Streets, then turn left to Van Mieu Street. Because there are many one-way streets in Hanoi, especially around the Temple of Literature, please pay attention to avoid traffic violations.

Currently, tourists and people visiting the Temple of Literature must buy an entrance ticket. Adult ticket price is VND 20,000 and child ticket is VND 10,000. This is a fairly cheap price and applies to both Vietnamese guests and foreign guests.

Some top restaurant nearest The Temple of Literature:

Temple of Literature is still a symbol of time in Hanoi. With a comprehensive introduction of Temple of Literature. Visitors will have chance to know about the place associated with the capital of this thousand years of history. Have a nice tour to Hanoi with Origin Travel.

This Can Cau market tour will show you how is a community cultural space. Because that is always expected of ethnic minorities. Immerse yourself in the

Hanoi is one of the two biggest first gates in Vietnam, as a capital city of the country and has the rich history, Hanoi located

Hoa Lo Prison: In addition to brutal torture images, the barrage of guerrillas brought the Hoa Lo Prison into the top five most frightening places

Hanoi flag tower built in the early 19th century is one of the few remaining pre-war relics of the area. Today, the flag of Hanoi

Speaking of Hanoi, to the Sword Lake, it is impossible not to mention the Turtle Tower. (Turtle Tower Hoan Kiem Lake). It’s a symbol of

The Top 6 Destinations Vietnam For Travel In March 2019