Being one of the most beautiful and famous landmarks of the capital. Hanoi West Lake has a fascinating and exotic charm. Traveling West Lake in Hanoi. Visitors can admire a beautiful romantic corner in the ancient Hanoi paintings. Where associated with many ups and downs of history, save many memories of the people. 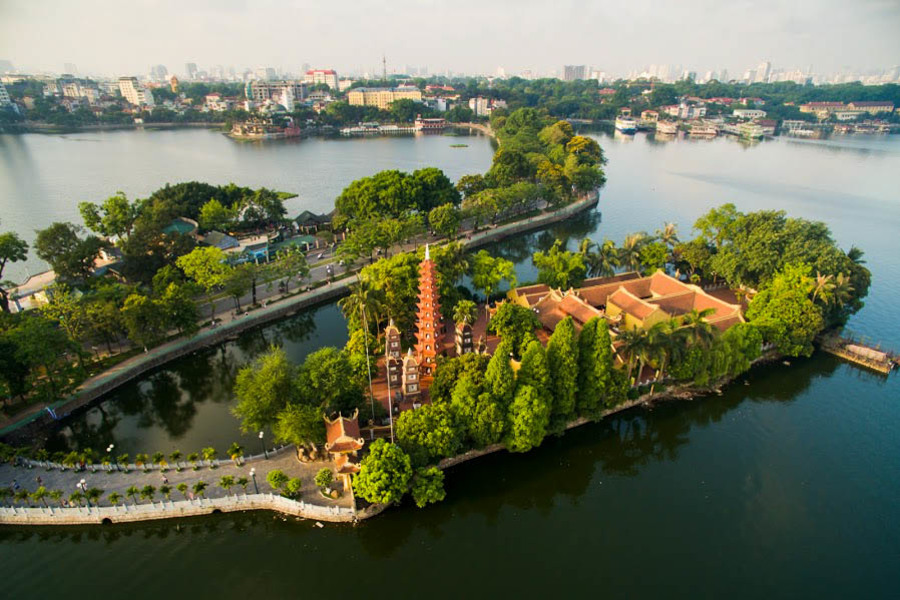 Hanoi West Lake is the largest natural lake in Hanoi, with an area of over 500ha and a circumference of 18km. It is located in the northwest of the capital. Long ago, West Lake is considered one of the beautiful tourist sites in Hanoi.

How Hanoi West Lake is unique?

West Lake has many different names, according to each cultural meaning of each era. These names are derived from legends, folk tales. Some typical legends about the name of  Hanoi West Lake include:

It is said that, in ancient times, our country has Master Minh Khong to treat the children of King Tong. The king was sick, the king wishes to repay. Zen Master does not ask anything high, only ask for a little black. When bringing the black copper to the South, the teacher has casted into four of the Buddha. In it there is a huge copper bell.

The bell is finished casting for a long time. The bell rang far into China. The golden buffalo in the copper warehouse in China heard. Because “black copper is the mother of gold”, yellow buffalo called mother to call immediately to the South, find the bell.

Because buffalo yellow pants around the bell should form a deep hole. Water gradually flooded into the hole, creating a vast lake, people called Lake Taurus.

This is the oldest name of West Lake. According to legend, the West Long Bien has a small mountain, the mountain has a crystal lake to harass the good people. Seeing that, Long Quan ordered that the water beraised. From here it turns into a deep pool, folk called Dam.

Legend has it that when King Ly Thai To moved the capital to Thang Long, Lake Kim Nguu became a destination for the king to regularly travel. However, many times sailing around the lake, the king meets mist cover to create the scene poetic, fanciful. So the king named the lake is Dam Dam means mist lake.

In 1573, King Le Thanh Tong ascended the throne, because the name of the people Duy Dam should be afraid of lust, people renamed the lake is West.

Hanoi West Lake – romantic heart in the heart of the capital 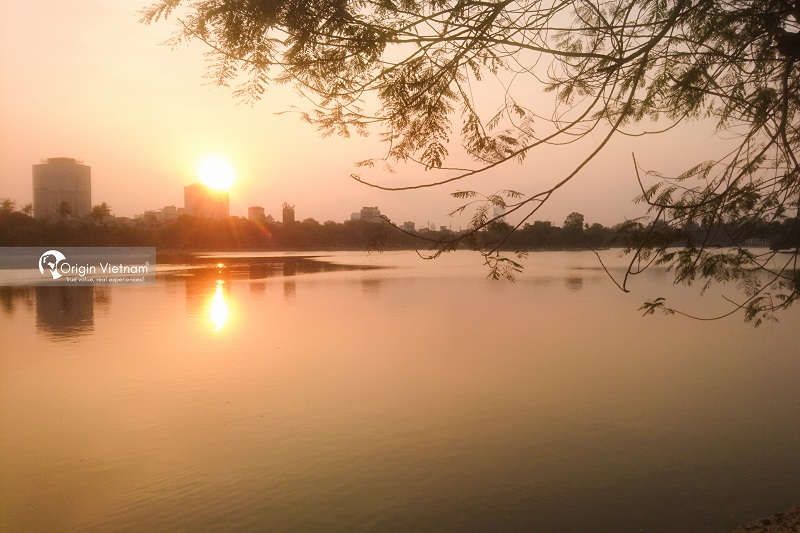 Referring to West Lake, people often think of the romantic beauty of the landscape. Indeed, the West Lake is a multi-colored picture, giving the audience many different levels of emotions. When cheerful, excited in the early sun; pure, fresh; sometimes silver, melancholy, nostalgic of the evil afternoon.

West Lake opens a world free, poetic. Perhaps because of the thousands of years, West Lake has always been an endless source of inspiration for writers, poets, artists… expressing their emotions through many songs and poems.

The West Lake today has changed but still the immense blue water is still the purple color of the surrounding goods, the red color of the pink phoenix blooms every summer, willow willow afternoon moody… Ho West as a romantic heart brings so many feelings to anyone when they arrive.

It is worth a visit Hanoi West Lake

Every morning, a lot of people from the old capital to find the West Lake to exercise and to breathe a breath of fresh air in the chest. The sun rises, the streets around the West Lake bustle up. At the beginning of the road, the bicycles carrying flowers began to gather in the market.

The scenery is somewhat different, surrounded by the West Lake is the high-rise, luxury hotels, but somewhere the atmosphere, the feeling that West Lake brought still, still passionate, absorbed poetry.

West Lake – a tourist destination can not be ignored 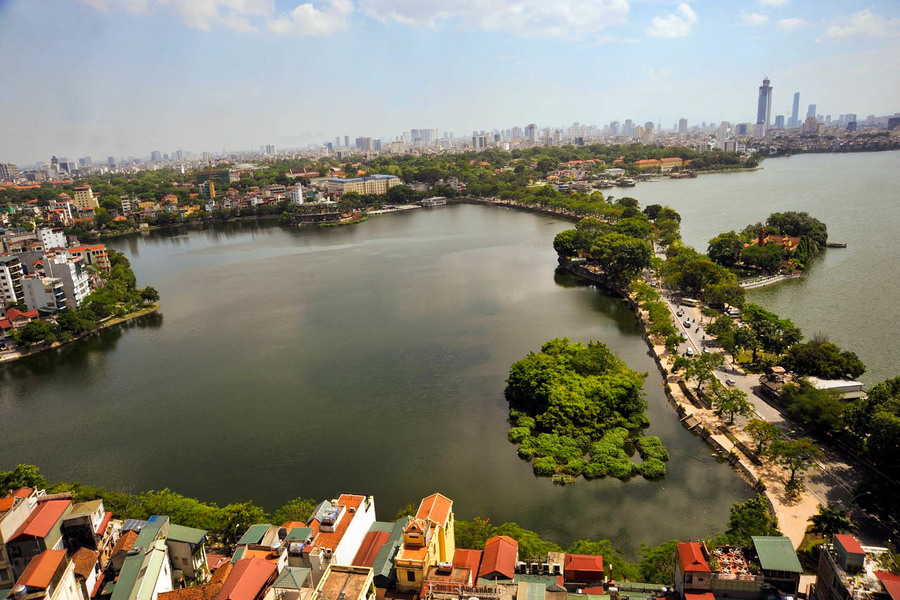 Hanoi has many attractive tourist attractions. Coming to the Hanoi West Lake, visitors can stroll around the lake, watching the beautiful scenery as a painting painted by the hands of talented nature.

Beside walking around the lake, visitors can also try to duck on the lake. Although this is a fun but slightly “old” butit will help visitors feel the whole atmosphere and West Lake.

Around Hanoi West Lake there are many famous ancient villages, visitors can combine sightseeing such as:

Please refer to “Experience when traveling in Hanoi” for more experience.

In addition to the old village, in the West Lake also has a fascinating attractions such as Phu Tay Ho. Phu Tay Lake is both a relic and a landmark. Tay Ho Lake is located on a large peninsula, stretching in the heart of West Lake. Tay Ho worshiping Lien Hanh Cong – one of the four saints “immortal four” of the Vietnamese belief.

Considered as the “green lung” of Hanoi, West Lake always brings cool breeze, making people’s minds feel strange. Hanoi West Lake tourism will help travelers explore the capital of tourists become more exciting and complete. Thank you for visiting the article. If you need more advice on West Lake tourism in particular and Hanoi tours in general. Please contact directly to Origin Travel via hotline 8482 909 8686. Wishing you have a wonderful tour to Vietnam.

The amazing 7 days tour package promises to make you feel you enjoy the best, the most wonderful landscapes in the Northern Vietnam. Picturesque scenery

If you have stopped in Sapa, do not miss the famous sightseeing places with majestic natural beauty, immense but no less poetic. Coming to this

5 Days In Hanoi And Halong Bay

Along with the traditional Ao Dai, the conical hat is a symbol of the gentleness and simplicity of a Vietnamese girl. And one of the

Not only a significant historical and cultural work, now Ho Chi Minh’s Stilt House has become a tourist destination in Hanoi attracting a lot of tourists

Dong Ho pictures are definitely no stranger to the Vietnamese people thanks to the beauty of folk culture. Dong Ho village offers the tourists with

Along with the sightseeing area of Van Mieu Quoc Tu Giam, Uncle Ho’s Mausoleum and One Pillar Pagoda. Imperial Citadel of Thang Long has become