Duong Lam Ancient Village located in the outskirt of Hanoi. Located next to the junction of Ho Chi Minh road and Highway 32. It takes about one and a haft hour drive from Hanoi centre to the village. Duong Lam ancient village is the perfect choice if you are looking for a peaceful countryside to rest after the chaos of life.

This place also preserves many houses of old architecture with brick roads, laterite walls and cultural features of the northern villages. 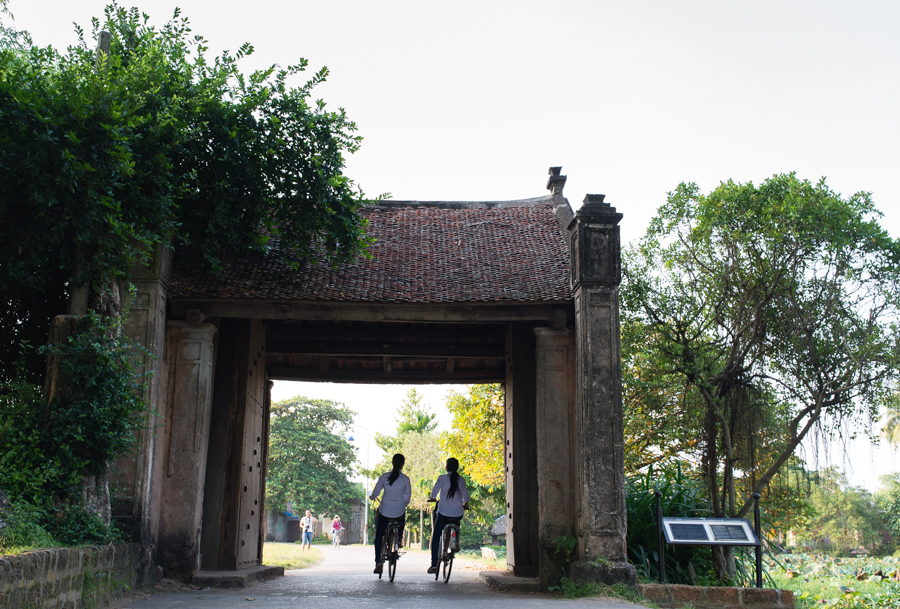 Duong Lam is the first ancient village awarded by the State of Vietnam with historical and cultural relics. In terms of preserving the history of culture and art as well as the architectural scale, Duong Lam ancient village is second only to Hoi An Ancient Town and Hanoi Old Town. It is still intact the art and architecture of an ancient village in the Red River Delta.

Coming to Duong Lam Ancient Village, you will see most of the features of an old village. With banyan trees, water wells, communal yards, pagodas, winding village roads, small alleys, old wooden houses, walls built of red bricks or plastering old … Duong Lam ancient village appeared in the middle of the current period. Also it modernizes the country like an old town full of nostalgia and tranquility.

Called “Old town forgotten”, but really today Duong Lam Ancient Village is very famous. This is an extremely attractive place for people and tourists to visit and explore.

Top 7 things to do in Duong Lam Ancient Village

This is the only ancient gate left to this day in Duong Lam. The village gate was built in the post-Le period, which has a different architecture than the traditional village gate, like a house with two sloping roofs, with support pillars and roofs in the style of “upper house Xiamen” (above is the house, below is the gate). Mong Phu Gate, together with banyan trees, water wharf, and lotus pond, creates a typical setting of the ancient Northern village.

Built nearly 380 years on a central area of the village, about 1800m2 wide. The design of the communal house is imbued with Vietnamese – Muong architecture, simulating the architecture of stilted houses with wooden floors on the ground. The communal house consists of two royal palaces and harem. The hall of worship is erected by 48 wooden pillars. On top of each column are carved many dragon and phoenix patterns.

Inside the communal house, there are many diaphragms. The most prominent picture is the “old dragon coach” that the dragon teaches the child and the “courageous idea” picture given by King Thanh Thai. This place also holds many unique architectural and cultural values, attracting tourists.

Built from the reign of King Tu Duc to worship and remember the merits of Flower Detective Giang Van Minh. The church faces south, the architecture is in the “second” shape. Today, the temple has become an attractive destination for visitors who want to learn about history and culture and is also a place of patriotic traditional education for the younger generation.

Duong Lam ancient village has 956 old houses, many of which were built in the years 1649, 1703, 1850, … These old houses are made from traditional materials: laterite, oval wood, bamboo, terracotta bricks, tiles, … with 5-compartments or 7 compartments.

In the past, the village’s well was where people get their daily water. Ancient wells here are located in a high, cool place, near the communal house, pagoda or the centre of the neighbourhood.

Phung Hung Temple is established in many places.  But the temple in Duong Lam village is the largest temple with unique architecture including Ta – Huu Mac, Dai Bai and Hau Cung.

7. Mausoleum and temple of Ngo Quyen

About 500m from Phung Hung temple is Ngo Quyen mausoleum. The complex of Ngo Quyen temple and tomb is built on Cam hill, in front of a large rice field and Lobster basin flowing into Tich river. The temple consists of a place of worship, a cult, a harem, and a stele house. At the bottom, about 100m from the temple is the tomb of King Ngo built in the shape of 4 roofs on a high pedestal with walls.

When is the best time to visit Duong Lam ancient village?

You can go to Duong Lam ancient village at any time of the year. However, the festive season and the ripe rice season are the most suitable time for a fun trip. 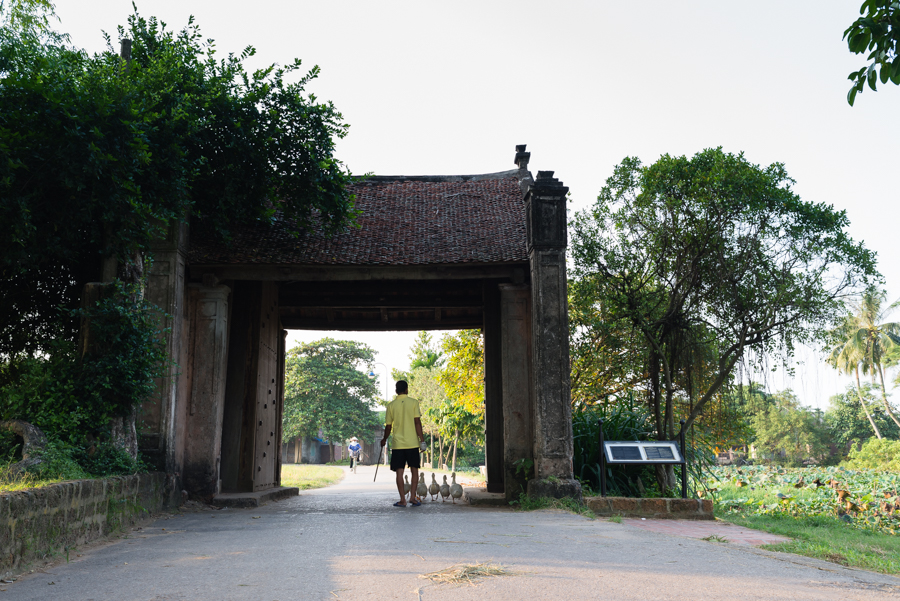 The Duong Lam village festival season takes place in January of the lunar calendar every year. The traditional festival of Mong Phu village takes place from the 4th to the 10th, is considered the most sacred ceremony of the year.

The ceremony of Thanh Hoang village is held at the oldest village communal house with processions of the procession, offering pigs, raising chickens, … Then the people in the village will participate in folk games such as chess, chess, fighting. chickens, blindfolded to catch ducks, … create a joyful and bustling festive atmosphere.

Six days later, the festival of Dong Sang village was held, praying for a peaceful nationality, abundant harvest with many interesting activities such as lion dance, water procession, sacrifice. The procession begins from the communal house to the Red River bank with dragons, unicorns, horses, flags, etc lasting nearly a day. Coming to Duong Lam during this time, you will enjoy the festive atmosphere and enjoy specialities that are only available during the festival. 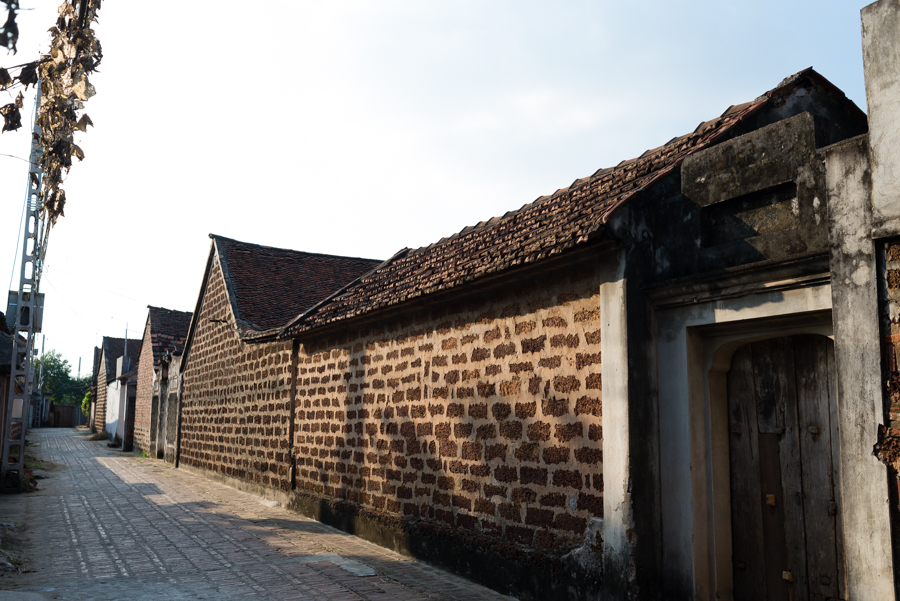 The season of ripe rice

May, June every year – when the rice fields are at full maturity. Duong Lam on the harvest day is also the time to welcome the most tourist. The roads in Duong Lam are full of paddy and dry straw creating a warm, peaceful and rare village scenery. Duong Lam is becoming an attractive destination for tourist who wants to find a truly authentic North Vietnam tours in this village. 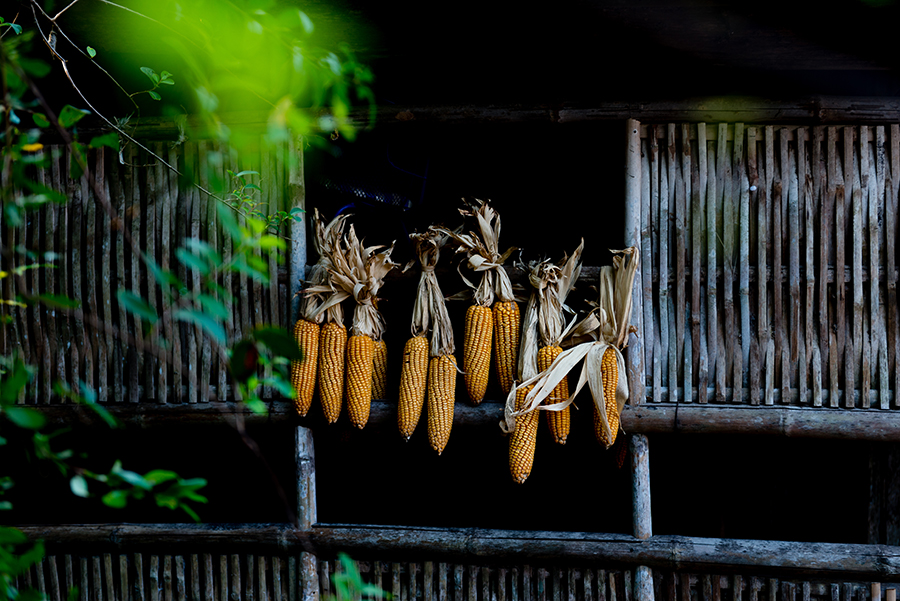 How to get to Duong Lam ancient village?

Located in the outskirts of Hanoi, the move to the ancient village of Duong Lam is also quite easy. You can reach Duong Lam in the following ways:

Go to by bus

You can also choose the bus My Dinh – Phu Tho to Duong Lam with travel time about 1h15p.

Due to its proximity to Hanoi, tourists often come to Duong Lam and return during the day. However, if you are far from Duong Lam or want to stay to enjoy the peaceful atmosphere of the village. And the hotels and motels in Son Tay will be the best choice for you.

In the past, this was a precious dish, used only to advance to the king or used on village occasions. Chicken cane has small legs, yellow feathers when hard-boiled has white, yellow and brittle skin. Come to Duong Lam, you can try this special dish.

Banh Te Duong Lam has many differences compared to those of other regions. Here the cake is wrapped with dong leaves, elongated, and spread evenly along with the leaves.

These are the traditional type of candy made with very popular ingredients such as peanuts, sugar, malt, sesame, rice flour. When eating candies have the sweet fragrance and the taste of sesame and peanuts.

Please drop an email to ruby@originvietnam.com or call direct to +84829098686 for All things need to know before travel to Duong Lam ancient village.

This special 1 day eco tour from Hanoi. That you will immerse yourself into a peaceful countryside with amazing rice fields. Especially discover an off-the-beaten-track

Hoan Kiem Lake (also known as Ho Guom) is the heart of Hanoi. This is not only a place to let their souls take a

Things To Do In The Evening Hanoi