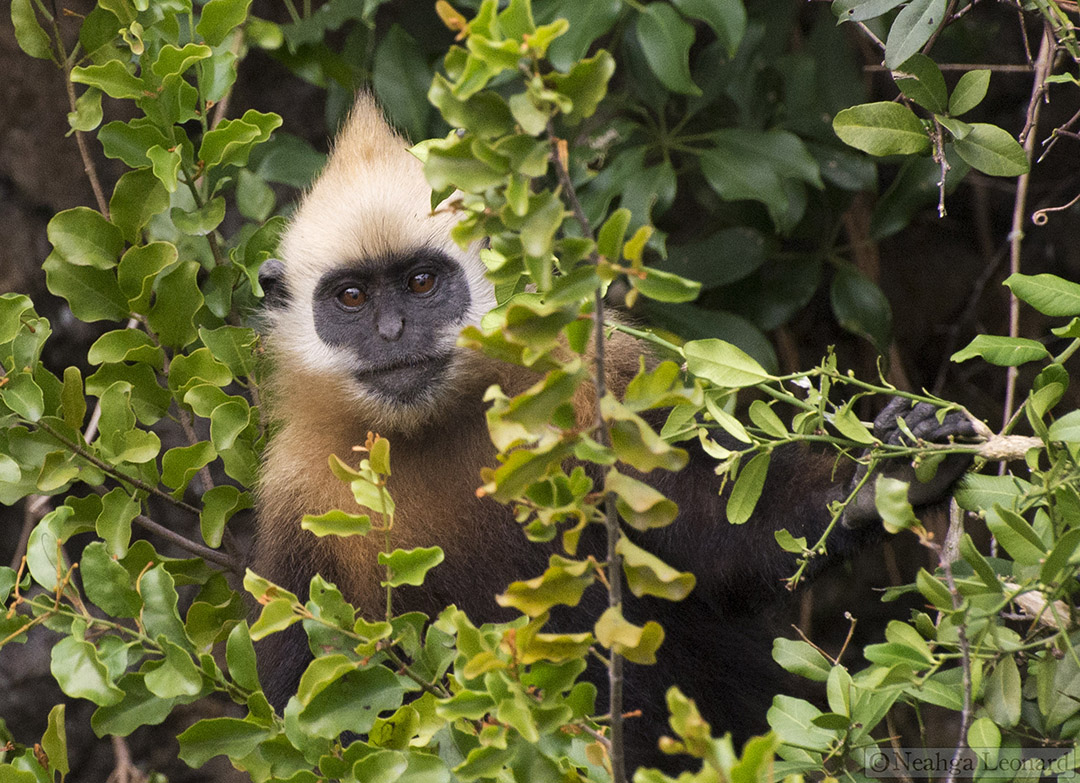 Cat Ba is a large forested limestone island in Ha Long Bay. It’s about 20km by boat from Haiphong. It’s got a population of about 15,000, mostly living in Cat Ba town. It’s also home to one of the very beautiful primates from the world, the Cat Ba Langur.

How Cat Ba Langur Is Special?​

Nevertheless, the langurs are also set to become known internationally for one more reason. If a miracle happens soon, they’ll be the initial big species to become extinct! Is there a crisis? . A century of incessant warfare and hunger has resulted in the depletion of wildlife for food and abandoned many of Vietnam species fighting for survival. Some of that are dangerously close to disappearing forever. 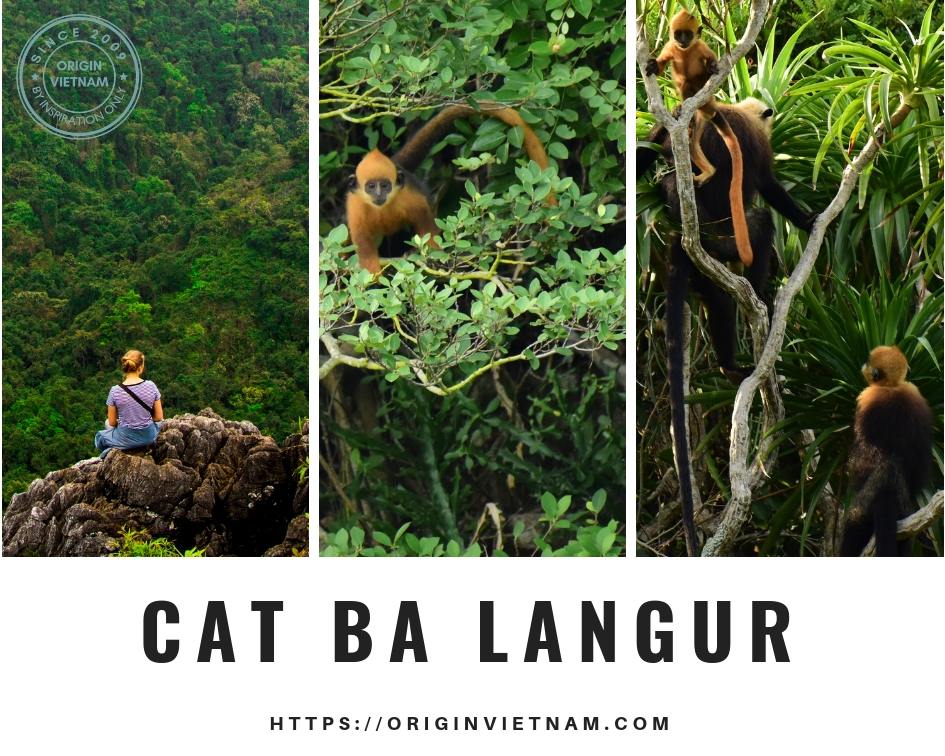 Among the most endangered, Vietnam’s few surviving. Cat Ba Langurs are the last of their type in the world, except for two orphans at a rescue center elsewhere. There are approximately 70 langurs remaining at present, a marked increase over the 40-43 that were all that were left in 2003. The langurs live primarily on the sheer cliff faces, and forage in adjacent patches of forest. Even though langur areas are protected within the National Park, an acute lack of funds leaves the langurs susceptible poachers, hunters and encroachments on their habitat through development on the island.

Currently, there isn’t much standing between the langurs and oblivion. Nevertheless, Zoo Leipzig, Zoological Society for Conservation of Species and Populations, and the Allwetterzoo Münster have joined forces to support the and Cat Ba Langur Conservation Project, currently led by Neahga Leonard, and have managed to start the slow rebuilding of the population. The Rosi came to Cat Ba Langur Conservation Project was started in in 2000 by Rosi Stenke and has dedicated herself itself to rescuing the langurs and protecting the larger biodiversity of the Cat Ba Archipelago.

Undaunted by the absence of resources and circumstances at the time, and working almost single handed, she’s in conjunction with Cat Ba National Park, decades of dedicated work have led to been notable successful. In At the 9 months before her arrival the start of the project, poachers murdered 30 langurs. Since that time, only 3 have fallen prey of hunters firearms.hunting of langurs has largely stopped, being replaced with a sense of local pride in the existence and continued survival of the langurs.

The park has been expanded and langur areas placed under Special Protection Area status which limits access to conservation staff and park rangers only, Environmental education programs have been established in all the schools on the island, and local communities have been brought into the conservation efforts Thanks to a $60, 000 donation from the US, some of the island’s most issues are being addressed. 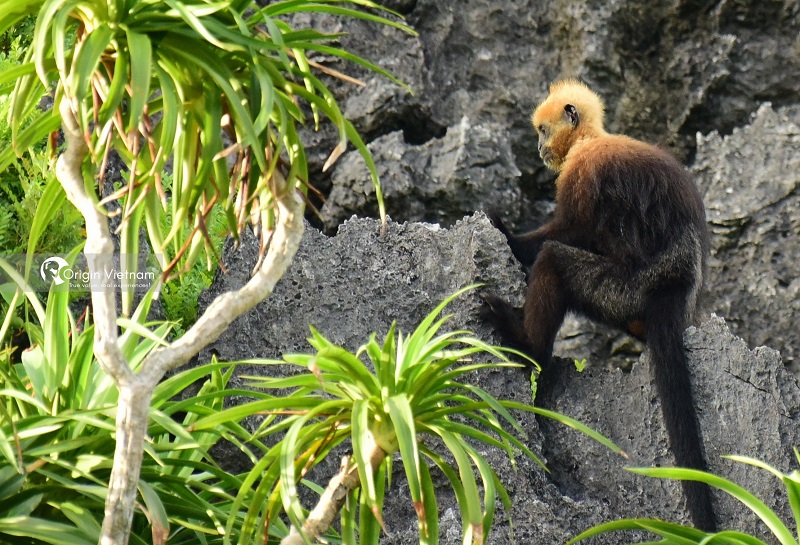 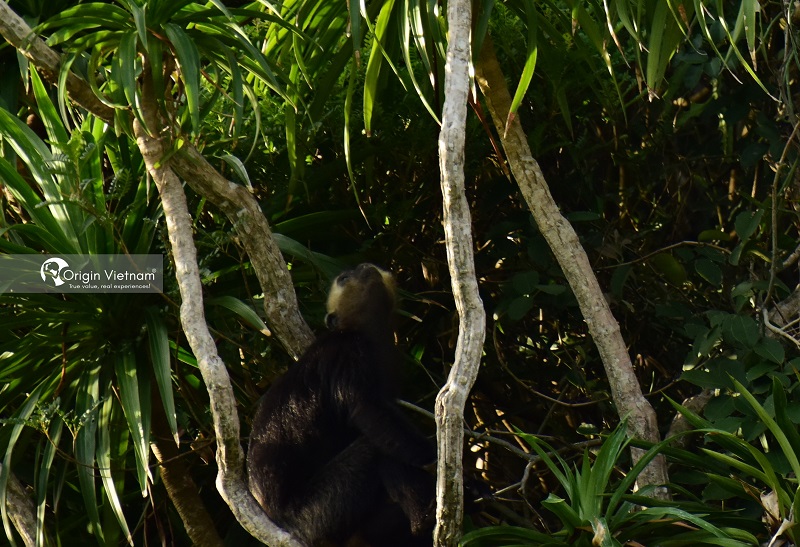 Efficient waste disposal measures are being put in place, a fresh water supply facility is under construction, and efforts to improve the living conditions of farmers and also makes them less reliant on forest products are being executed. These long- term activities are vital to ensure the island’s outstanding bio diversity. Nonetheless, in the brief term the langurs grip on their lifeline is dangerously fragile. The population has been stabilized. But at a in a low level that is dangerously low – poachers can easily change the balance at any time. Rosi The Cat Ba Langur Conservation Project has recruited a bunch of farmers people from among the local population and trained them to become Forest RangersForest Guardians, a team focused on protecting the forests of Cat Ba through anti-poaching work and community education.

They’re committed to protecting the six communities of langurs scattered throughout the forests surrounding their villages, as well as the three sub-populations of langurs found on the cliffs. and small offshore islands and are successfully Through their efforts poaching has become more difficult on Cat Ba and in keeping the poachers at Lan Ha bay.

What Help Is Needed For Cat Ba Langur?

Sadly, there are inadequate capital to undertake a breeding program to strengthen the survival prospects of the six groups of langurs. Breeding programmes usually involve catching animals, breeding offspring and releasing them into the wild. The small Cat Ba langur colonies are divided by agricultural pursuits purchase and reimbursement is necessary bands purchase and reimbursement also necessary.

To enable the different purchase and reimbursement is necessary from human action purchase and reimbursement is necessary property to its natural state. Since purchase and reimbursement is necessary income source of many poor farmers, property purchase and compensation is necessary. Where breeding males are trapped on islands, they should be recorded. This requires equipment and expertise.Education and awareness of the failing environmental situation in Vietnam is critical, not only for the sake of the Cat Ba Langur, but for all the other species that Vietnam is a home for. Both the Cat Ba Langur Conservation Project and Cat Ba National Park need support to protect the langurs and the biodiversity of Cat Ba. It is important that visitors to Cat Ba do not purchase any forest products, especially orchids, ornamental plants, medicinal plants, rượu đế containing animals or plants, animals, etc as all of these have been taken illegally from the forest by poachers. Visitors need to remind guides not to take or disturb animals and plants living in the forest and in the water surrounding the island, as well as making sure that all litter is properly disposed of. Visitors and tour providers need to stay quiet when in the forest or in the bay to avoid disturbing wildlife. Donations of funds and durable equipment for fieldwork are also useful for conservation efforts.

Among a rich number of fauna species in Cat Ba National Park. But the langur is the most interesting. They are in small quantity so we will need protecting population is extremely small and the areas langur live are off limits for tourism due to the impact human activities have on the langurs. Despite that, sometimes while trekking tour in Cat Ba National Park you may be lucky enough is not easy for you to see them. But if you are lucky enough you can see it sometimes If you do see them stay quiet, maintain a minimum distance of 50 meters, and do not use flash photography. Also, We all need to have awareness of preserving this species to partly protect the important nature diversity of Vietnam.

This 1 night tour in Cat Ba Island and National Park as well as Viet Hai village will be the great chance for you to discover this National Park and Island. Our trip will bring you to have the chance to reach must-see places in the island to explore its exotic natural beauties from mountain to the “Off the beaten track” sea bay.
Click Here
Top Recommended 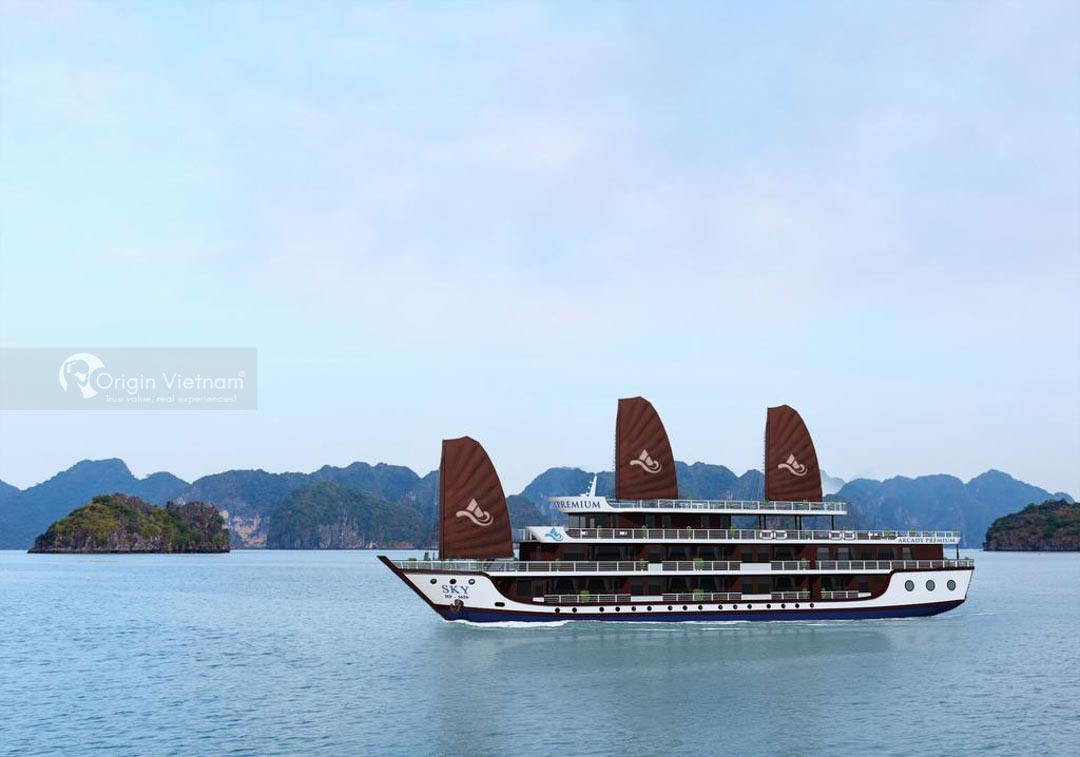 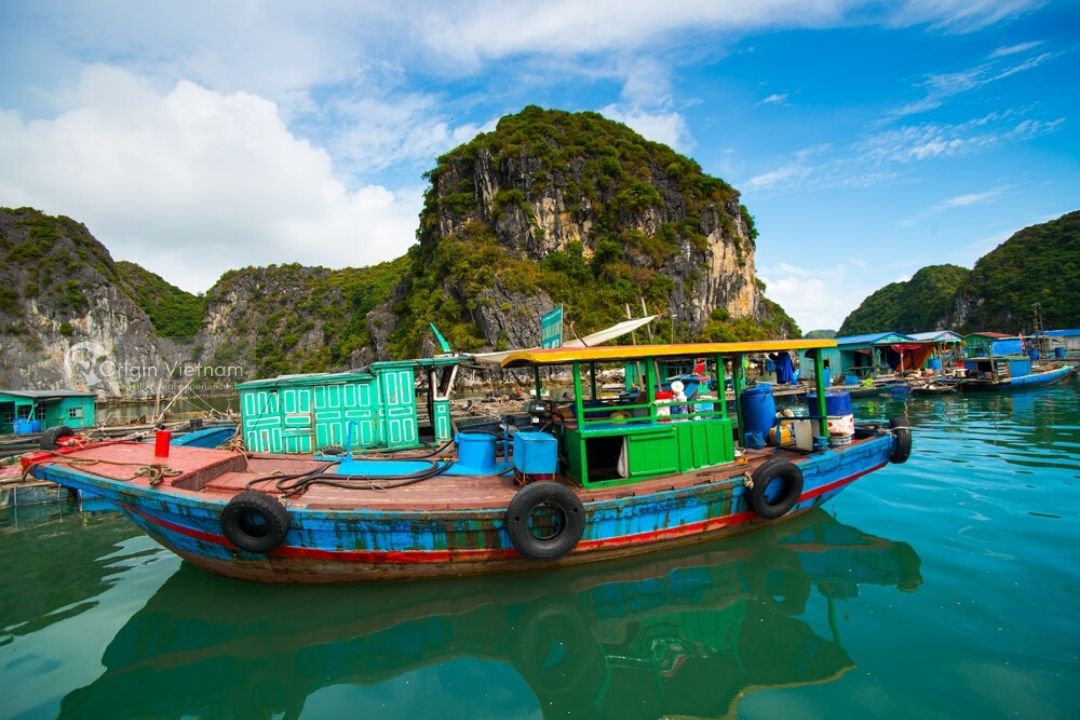 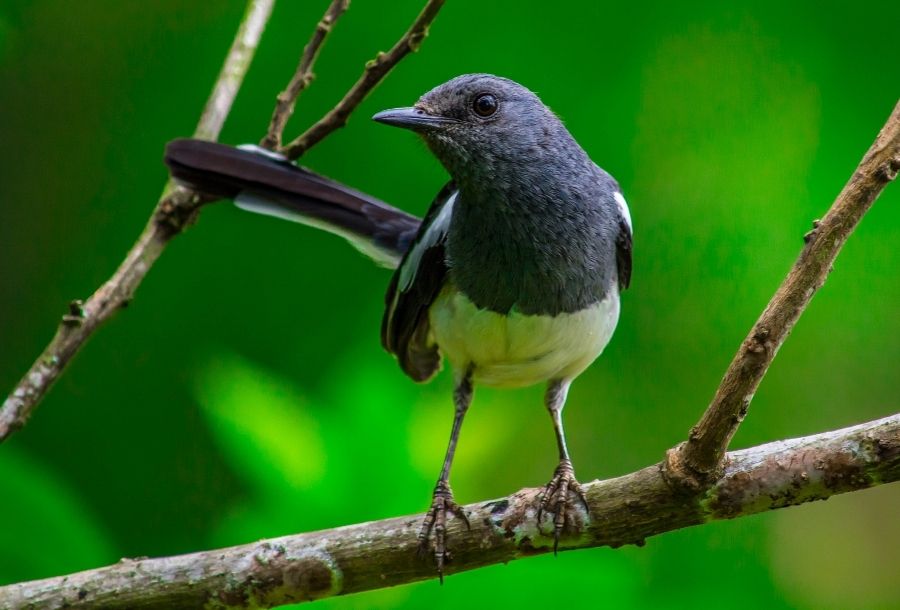 Cat Ba island bird watching 3 days, it will make you a wonderful journey to discover the impressive Cat Ba Island and National Park. You 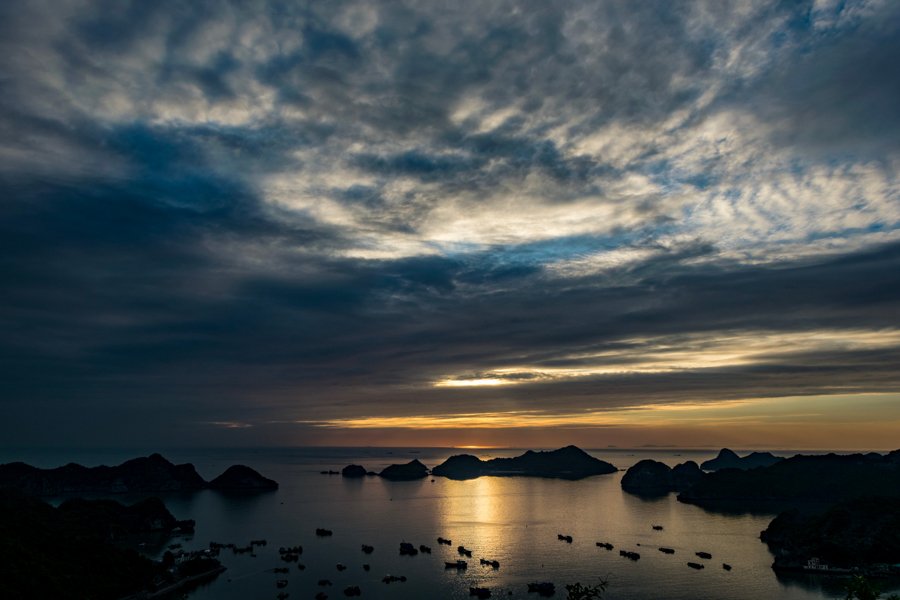 Hiking in Cat Ba National Park is the best way to discover this natural park where has natural beauties, diversity biodiversity, etc. Travel to here,

Due To the gorgeous unspoiled natural scenery together with wonderful beaches. Monkey Island became a highlight of Cat Ba Island tourism. It’s also the first

Top 10 Things to Do in Cat Ba Island

In recent years, Cat Ba has become a tourist trend for young people. However, not everyone knows how to travel to Cat Ba and what

Top 5 Exotic Place You Should Visit This Summer

A Day In Van Boi Beach