Son Doong cave in Son Trach commune, Bo Trach district, Quang Binh province. This is the largest natural cave in the world, located in the Phong Nha-Ke Bang National Park. Natural scenery here is like surreal on Earth.Nestled in the midst of the vast forests of the Phong Nha-Ke Bang National Park, Quang Binh Province. Son Doong has beautiful and impressive landscapes, like an underworld underground with jungles, streams, waterfalls. water, beaches, flora and fauna.

Recently, Son Doong is open to visitors. This is a great attraction for connoisseurs and discoverers, especially those who love Vietnam tour adventure. 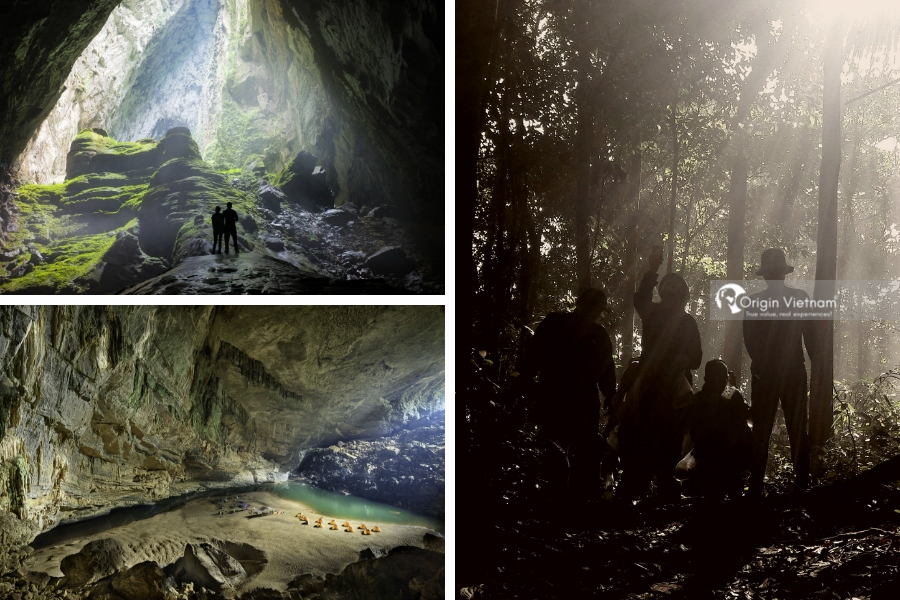 To get to Son Doong cave, you need to have a specific schedule, carefully prepared from accommodation, travel. Otherwise, it will be difficult because the terrain is quite dangerous.

First of all, you can drive to the 39th, Ho Chi Minh Road, West. From here, you will walk slowly down Doong valley. Then go through the Van Kieu ethnic minority. You can take lunch in the village before proceeding. At this time, the path will be more difficult, so you need to observe carefully, go along the stream to enter the En Rose. It is possible that our explorers will have to stop here overnight. If you are accompanied by a tour guide, you will be told about the story, the culture here.

Discover Son Doong cave you will take time about 5 days 4 nights tour. As a new destination – strange – attractive so the price for a tour to explore Son Doong is quite expensive and not everyone has the opportunity to book tickets. If you want to conquer the nature here, you need to actively monitor to not miss the opportunity when tickets are sold. The price includes a tour of Son Doong which ranges from over VND 60 million, stays in the cave and hotel for 2 nights, costs the visitors’ health before departure.

Due to the strict regulations of the exploitation along with conservation, each tour has only 10 tourists. But the service team is up to 30 people: 2 cave experts from England, 1 tour guide, 2 chefs, 1 porter, 2 rangers, and 20 porters carry 600 kg of safety equipment, camping, and food, so the price is so expensive.

This is a type of adventure tourism, the journey to conquer the mountain pass, wading streams … All visitors when booking tours Quang Binh are required to answer the real question in health, medical experts Check your heart rate and blood pressure thoroughly, if achieved then be accepted.

As you walk into the cave, you will see the high stalactite stalks, a forest with no trace of human beings. It is a vegetation with a variety of precious plants. And especially the fog is always covered, creating a separate climate, separate from the outside.

You continue to cross about 50km through thick jungle and cross the tall stalactites in the cave, to explore further inside the cave. Come to the cave you will be able to see the greatness that the Creator has given to this place.

The fossil corridors appear here, evidencing that life existed in the cave millions of years ago. Son Doong also owns columns of stone as high as 70m. Or large jade pearls known as “cave pearls”, the chemical composition of these blocks is identified as calcite. Inside the cave you can see the underground river flowing, about 2.5km in length.

Here, you can see coral reefs and fossilized animal skeletons. At the ceiling there are many faults, creating the wells, bringing sunlight into the cave. Facilitate the growth of vegetation in the cave

According to the geologists, Son Doong cave was formed about 2-5 million years ago. Its size is equivalent to the capacity of about 68 Boeing 777 aircraft. With such size Son Doong cave has become the world’s largest natural cave. Get your time and your health, especially your finances so you can conquer the world’s most spectacular caves.

This is special offer full day Phong Nha Caves tour to explore the most magnificent and brilliant caves. Join us, that you will have unforgettable

Travel to Phong Nha Ke Bang and have the opportunity to watch one of the hundreds of birds in the park. You will have the

With specialities “full of sunshine and wind”, however, Quang Binh with its beauty brings an indisputable attraction for visitors. Dubbed the “kingdom of the cave”.

Quang Binh is one of the top tourism resources in Vietnam and Southeast Asia. It’s the longest coastline in Vietnam with many beautiful beaches. Such

Top 5 Vietnam’s Off The Beaten Path

Phong Nha Builds The Longest Zipline In The World